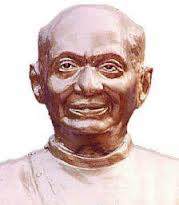 He believed that a synthesis of religion and science would be beneficial to mankind. He also held the view that the practice of yoga and study of science have certain similarities. Basic yogic practices are meant to train a person to gain mastery over the mind and the body.

That was, Bhupathiraju Lakshminarasimha Raju, who was later christened Swami Jnanananda by his guru, Swami Purnananda. He went to Germany in 1927 to deliver religious discourses and to get his religious works printed. His lecture on `Time and Space’ attracted the attention of Prof. Dember at the College of Science and Technology of Dresden University.

Prof. Dember’s lectures on Einstein’s theory of relativity caught the attention of the Swamiji. However, he could not fully understand the lectures as his mathematics background was inadequate and requested Prof. Dember to permit him to study the undergraduate course in his university. Though the Swamiji did not have any formal school education in the German system, he was admitted to the course after qualifying in an entrance test.

He successfully completed the undergraduate course in two years in December 1929. He earned while he learned by giving over 150 lectures on different subjects in yoga at different places. His major work, `Purna Sutras’, as well as a few of his important lectures delivered in Germany were printed during this period, writes V. Lakshminarayana, a retired professor of Nuclear Physics in Andhra University in his article published by the AP Akademy of Sciences.

Born in Goraganamudi village near Bhimavaram in West Godavari district on December 5, 1896, Swami Jnanananda was trained by a private tutor at home for about five years before joining the Taylor High School at Bhimavaram. He was interested only in mathematics, physics and chemistry in his high school. He could not pass the S.S.L.C. examination in 1917 for his poor performance in non-science subjects. He discontinued his studies and concentrated more on religious practices.

Jnanananda’s father, Rama Raju, was a wealthy landlord, who was interested in Vedic and scholarly pursuits. He had a very good library of important ancient scriptures that provided an opportunity to his son to study many of them at an early age and developed an inclination in him towards yogic practices.

In order to divert his attention, Rama Raju performed the marriage of his son in 1916 much against his wish. The swamiji was inspired by the life of the Buddha and renounced worldly pleasures. He did not lead any family life and left home without informing anyone on December 21, 1917, when he was 21 years. He went to Lumbini, the birthplace of the Buddha, in Nepal. He lived in ashrams and ate whatever food was available. He toured pilgrim centres in North India for about 10 years.

He strictly practised yoga, which helped him withstand the cold climate of the Himalayas. The attempts of his father to divert him from his spiritual life proved futile. In the 1920s, he started giving religious discourses. He wrote several devotional poems and `Purna Sastras’ was his major work. He did his graduation in Germany in the early 1930s. He went to Prague in Czechoslovakia to work at the Charles University with Prof. Dolshek for about three years. His research at the university led to the development of precise methods in X-Ray spectroscopy for which he was awarded a D.Sc. in 1936.

When conditions for continuing research work became difficult following the outbreak of World War II, he migrated to England, where Sir James Chadwick, the inventor of the `Neutron’ accepted Swamiji to work in the Nuclear Physics Department at the University of Liverpool. His work on Beta Ray spectroscopy between 1940-43, earned him a Ph.D.

He later proceeded to the US and continued his research on Beta Ray spectroscopy with a number of radioactive isotopes at the Michigan University. He completed the writing of his book on `High Vacuum’, which he had been writing since 1939.

He returned to India in 1947 and the next year, he joined as senior scientific officer at the National Physics Laboratory in Delhi. He assisted in the preparation of a comprehensive development plan, which included setting up of nuclear measurement facilities. He was promoted as Assistant Director and Head of the laboratory in 1950.

He came on vacation to his native village in Bhimavaram, when he met with a serious accident on April 24, 1954. He was severely injured in his right arm, shoulder and right leg and was admitted to the King George Hospital in Visakhapatnam. When he was able to walk and attend to his normal work, the then Vice-Chancellor of Andhra University, V.S. Krishna, approached him and requested him to join the Physics Department for developing nuclear physics facilities.

The Swamiji accepted the invitation and joined as the Gautami Professor (an endowed chair) in the Physics Department on October 15, 1954. He prepared a comprehensive plan for development of the department to develop the necessary infrastructure for undertaking teaching and research in nuclear physics. A separate Nuclear Physics Department was started on July 1, 1956, and a building to house the department was completed by 1958, when he was promoted as Professor and Head of the Department. He continued in that position till 1965.

After his retirement from service, he was appointed an Emeritus Professor. He continued in that position till his death on September 21, 1969.

A bust of this scientist with a humane heart has been installed in front of the department building on the campus.