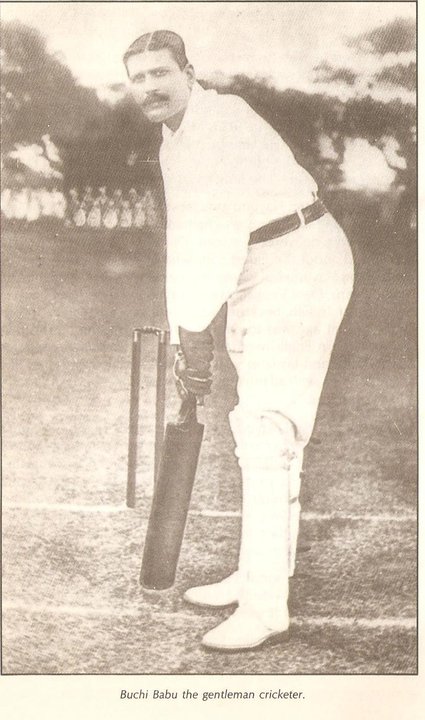 To the citizens of 19th Century Madras, Modhavarappu Dera Venkataswami Naidu was something of a wonder. Tall and aristocratic in mien, he had migrated from Nellore and became dubash of Parry & Co., in which capacity he amassed enormous wealth. This he invested wisely and well. Most of the present-day industrial area of Kakalur was his, as were entire streets in Triplicane. In fashionable Luz in Mylapore he acquired 20 acres and built Lakshmi Vilas. When he retired from business in the 1850s to lead a life of leisure, the position of dubash went to his son-in-law, B. Ramaswami Naidu. The latter and Venkataswami’s only daughter had five sons.

The eldest of these children was Venkatamahipathi Naidu, or Buchi Babu, born in 1868. He and his four brothers were brought up in the best English tradition, thanks to Venkataswami Naidu bringing from England the best governesses. These women would take their wards to Chepauk to watch the English play cricket. Soon cricket developed as a pastime at the vast grounds at home. The tennis courts of Lakshmi Vilas and the long verandah of Luz House, the second of the family residences within the compound, served as pitches. Syces were asked to throw the cricket ball accurately and with good length and direction and thus the boys acquired good practice against pace bowling.

Venkataswami Naidu, having no male offspring, adopted Buchi Babu and, on VN’s death, 65 per cent of his estate was bequeathed to the latter, the remaining going to the other grandsons. Thus at a very young age, Buchi Babu was an enormously wealthy man. He had graduated from Presidency College and, for a brief while, had worked as dubash at Parry’s. But soon he severed all links from business and became a gentleman of leisure. The post of dubash went to his brother B. Ramaswami Naidu.

Buchi Babu’s decision to retire was to pay handsome dividends for Indian cricket. He realised that Indians could only organise scratch teams to play but had no clubs to raise teams to meet other teams. He organised a meeting of several young men from well-to-do families of Madras and explained to them the need for a club. Not waiting for their support, he secured a site on the Esplanade. The ground was levelled at Buchi Babu’s expense and was converted into an ideal space for cricket. That was in 1888 and, thus, was born what Buchi Babu christened the Madras United Cricket Club, the MUCC, or the MUC as it would later become. It marked the birth of Indian cricket in the city.

Most of the members were boys from poor families. Parents considered cricket a waste of time and very reluctantly allowed the boys to play the game. Orthodoxy was another factor, for cricket did not recognise caste barriers. It was common for players to slink away from home in dhotis and then change to trousers at the venue, for leaving home wearing trousers was a sure sign of going out to play. Opposing teams were invariably from schools and colleges. And it was from them that Buchi Babu selected promising youngsters. He imported shirts, trousers, cricket boots, bats, balls, gloves and other equipment for his players and encouraged them in every way. Over time, the MUC became known for its six perfect pitches, all better than those of the Chepauk-based, English-only Madras Cricket Club (MCC). And it was Buchi Babu’s dream that his MUC would one day be invited to play against the MCC.

That came about when his friend P.W. Partridge of the legal firm of King & Partridge suggested it. Partridge was then captain of the MCC team. Buchi Babu agreed, provided his team was allowed to lunch at the MCC pavilion. Till then the practice had been that when MCC played against Indians, its team members would eat in the pavilion while the Indians would make do under trees. Agreeing to Buchi Babu’s terms was a major step and it took all of Partridge’s convincing powers to get his fellow members of the MCC to agree. But give in they did. As the Indians were by and large unfamiliar with occidental table manners, a separate table with Indian food was arranged for them, but under the same roof as the MCC members. It was a quiet revolution that Buchi Babu achieved. Soon, the same facilities were extended to all Indian teams playing against the MCC.

Thanks to Buchi Babu, several Indians made a name in Madras cricket. Apart from his three sons, M. Venkataramanjulu (Bhatt), M. Baliah and C. Ramaswami, there were R. Chari (“the greatest of all left-arm bowlers that Madras produced”), Subbarayalu (a fast bowler, a punishing batsman and a good slip fieldsman), Narayan Rao (“the first to adopt the orthodox forward play in batting”), K. Seshachari (wicket keeper who went with the Maharajah of Patiala as part of the All India team in 1911 to England), and B. Subramaniam (lieutenant to Buchi Babu in cricket matters and a fine opening batsman). Buchi Babu himself turned out regularly to play though, according to his son Ramaswami, he was heavily built and so got tired after scoring 50 to 60 runs and would throw away his wicket. He had “an upright stance, and his strong points were full-blooded off-drives and powerful square-cuts.”

In 1907, encouraged by the success of the MCC vs MUC matches which had become a regular fixture by then, Buchi Babu and Partridge decided on an annual Europeans vs Indians match to be played during Christmas Week. This soon had the blessings of everyone and the hunt began for suitable players to make up from the whole Presidency, a representative eleven for each side. The Europeans contacted clubs in the mofussil and military while the MUC worked in tandem with the South Indian Athletic Association. In the event, the two sides were to be dominated largely by the MCC and the MUC respectively. And by December 1908, the teams were ready.

All was set for the match when Buchi Babu died suddenly on December 19, 1908. It was the culmination of a series of grim tragedies that had struck the house of Dera Venkataswami Naidu since the beginning of that year. In 1906, Buchi Babu and his wife Bangaru Ammal had married off their eldest daughter Narasamma, aged 12, to her maternal uncle (Bangaru Ammal’s brother). The young man died in 1908. Bangaru Ammal’s father adopted her youngest son and he became Cotah Ramaswami, taking his grandfather’s initials. But the early widowhood of her daughter was too much to bear for Bangaru Ammal who died in September 1908. Buchi Babu felt her loss keenly for, apart from a wife, he had lost a wise adviser and capable administrator of his vast estates. The sorrow and subsequent worries broke him and caused his early death. It was a grievous blow to his eight children who came under the loving care of his brother Chitti Babu. But his larger family, that of cricket fans and budding players, felt his loss even more. The annual Presidency Match of 1908 was almost abandoned, but thanks to B. Subramaniam it did take place on December 31, 1908 and January 1, 1909. Heavy rains, however, led to the match being abandoned.

Buchi Babu’s family itself was to produce sportsmen and sports women for several generations. His finds on the fields were to keep his name aloft and ensured that cricket became a part of Indian tradition. Over the years, the MCC Indianised and with independence India came to be among the foremost cricketing nations, with several from Madras adding to the glory. Buchi Babu would have been delighted. His MUC, of course, is now no longer a major player, what with its vast grounds having been taken over by the Government to build a bus-stand. But the success of the game is undisputed.