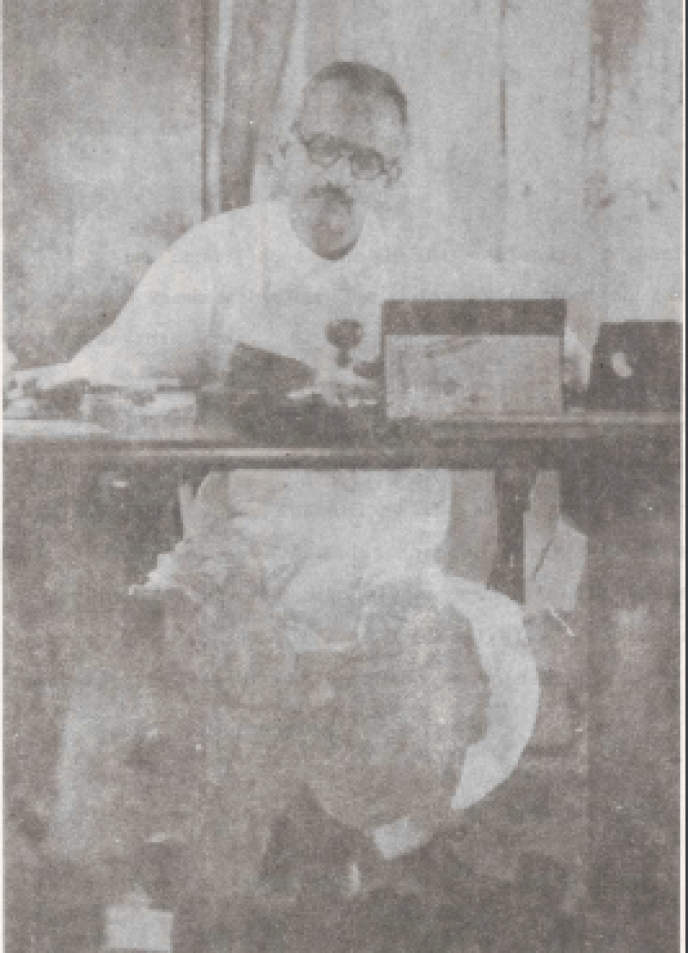 Cancer cut short a highly promising career of Ayyagari Ramamurti at 53 at a time when he was about to put Andhra in the forefront of the industrial map of India. The efflorescence of a teacher of science in a government school into a builder of a leading precision scientific instruments manufacturing company in the country is a saga worth recalling.

Ramamurti was born on 4.10.1895 in Amalapuram of East Godavari Disrict. Right from his younger days, he was fired by nationalistic fervour. After graduation, he joined the government school at Machilipatnam as a science teacher and made a mark there but had the shock of his life when he found that even the simplest instruments he used in the science laboratory were imported. The nationalist in him rebelled and he decided he must do something about it. He was one of the best teachers in the school and was offered promotion as Headmaster. But he spurned the offer and resigned, shocking his family by leaving a secured government job. He had a big vision but zero resources. He borrowed a few hundred rupees from sympathetic souls and started the Andhra Scientific Company as a trading-cum-manufacturing unit in 1926. His initiative was the capital, his passion was the land, his perseverance was the labour and his courage was the organization.

In those day, imports were free and plenty. Banking and financial credit facilities were few. Government encouragement, unlike at the present, was non-extent. Training facilities for skilled and semi-skilled labour were meagre. Andhra Pradesh was then a backward area industrially. For everything, from a precision lathe to a standard screw or bolt and nut, one had to depend for supplies on Madras.

It is against this background one has to assess the achievements of Ramamurti in founding the Andhra Scientific Company and making it into one of the foremost of its kind in the country within a span of two decades. The first ten years were challenging years for young Ramamurti. He had to undergo many trials and tribulations and contend with professional rivalries and personal jealousies. With courage and devotion, he built up the business step by step and brought it up from almost a one-man-show into a considerable size and importance. In 1937, he converted it into a public limited company with a capital of Rs.5 lakhs.

Development of the company was as fast as it was varied. Being obliged to be self-dependent for everything, he had to start its own carpentry, smithy, foundry moulding, planting sections besides a full-fledged workshop. To keep all these divisions busy the production had to be diversified and increased. Thus we find the Andhra Scientific Company manufacturing such a large variety of instruments.

But the real greatness of Ramamurti was finding suitable personnel for all these jobs and he did it successfully, almost all being from local talent. The only local talent available consisted of illiterate artisans from the fishermen and goldsmith communities. However, he made them into first rate skilled and semi-skilled workers. The next ten years saw very great advance in the Andhra Scientific Company as well as in Ramamurti. The second world war gave a boost to indigenous production and the Company, which was already well equipped for it, seized the chance.

Ramamurti, who never lost an opportunity, spotted and recruited right talent and started a research and development department, which enabled him to go into designing and production of advanced and sophisticated optical instruments. By the end of the second decade the Andhra Scientific Company became the leading and biggest manufacturer of precision scientific instruments in the country with a turn-over of about Rs.25 lakhs a year and 600 people working and with spacious worship and building of its own and share capital increased to about Rs.10 lakhs.

Ramamurti was as zealous about the quality of the instruments as of the welfare of the employees. While he never compromised on the former, he never neglected the latter. Innumerable were the ways, Ramamurti used to look after his employees, extending his sympathy and financial assistance in their hour of need. His concern went beyond the worker to every member of the workers’ family. Elderly women of the workers’ families were asked to come to the factory at noon time, prepare fresh lemon juice and serve it to the workmen. This not only gave them some money but also boosted their self-esteem. He used to pray daily thanking the Almighty for choosing him as an instrument in creating livelihood to so many.

In 1947, he set up a unit at Chittigudur, a village seven miles from Machilipatnam for processing the raw materials into semi-finished goods, thus saving a lot of time and energy of his workers. He wished to set up a chain of such units and ancilliary units all along the Machilipatnam-Vijayawada Road and thus create local employment. Even when he was severely down with cancer attacked, he was planning for the further expansion of the Andhra Scientific Company. In 1948, he appointed an England-trained electronic engineer to start electronic instruments manufacture. Before the work could be started in earnest, he passed away. With him his plans also perished.

Ramamurti was a multi-faceted personality. His interest was not confined to instruments manufacture alone. In the early 1940 he and his brother, Dr.A.N.Rao, started a pharmaceutical factory at Machilipatnam called Eastern Drug Company. Around 1944, he founded National Chemicals Ltd., at Machilipatnam with a capital of Rs.10 lakhs for manufacture of industrial chemicals, fertilizers, pesticides and laboratory chemicals. He started the Scientific Glass Products Ltd., for manufacture of optical components. But his biggest achievement would have been the starting of a Soda Ash factory in Andhra for which he had secured Central Government’s permission to locate it at Machilipatnam with a capital of Rs.1.5 crore. While the protracted negotiations were taking place with the Madras Government, Ramamurti had a severe set-back in his health. While undergoing rest at Banagalore after a major operation, a huge fire accident in the Andhra Scientific Company in 1948 forced him to rush back and start reconstruction work right from ashes. This strain caused a major upset and gradually sapped his energy and finally he passed away in July 1949, throwing all his plans and his dreams into disarray.

No greater tribute could be paid to Ramamurti than that, three and half years later, all the company employees voluntarily contributed from their meager salaries and erected a statue in his memory in the company’s compound. It was unveiled by none other than Dr.S.Radhakrishnan, the then Vice-President of India and a great admirer of Ramamurti, on the occasion of the Silver Jubliee of the Andhra Scientific Company in January 1953.

Andhra Scientific Company was taken over by Bharat Electronics Limited, a Govt. of India company,  in 1972. It remains a wholly owned subsidiary of BEL.