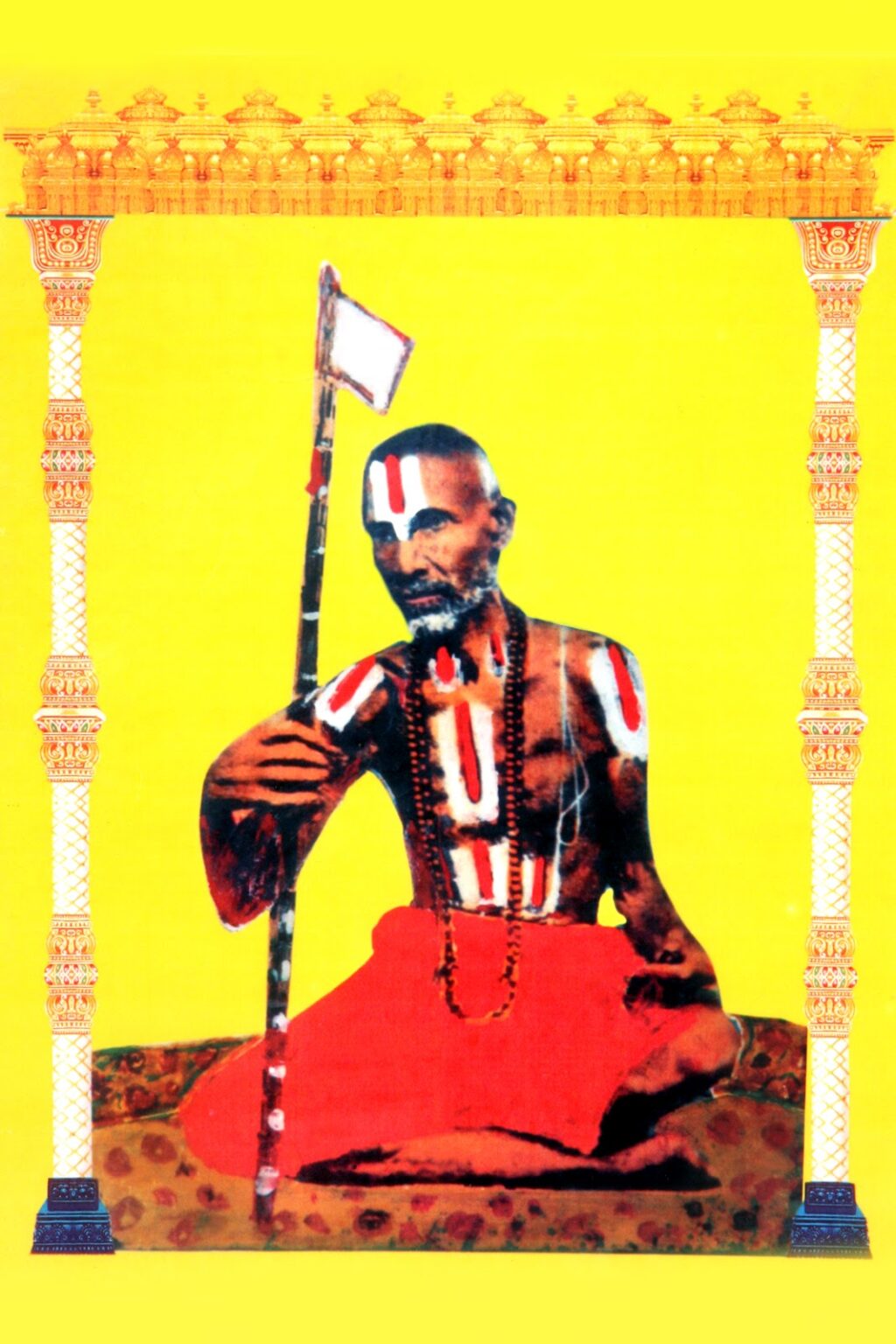 The great and less popularized Alluri Venkatadri Swami was born as Venkatadri, to the blessed couple Sri Venkaiyya and Srimathi Venkamma in 1806, at a village called Alluru in the Jajuru Paradala taluk of Krishna district of Andhra Pradesh.

As a person, who was blessed even in his mother’s womb, Sri Venkatadri was found to immerse himself in the service of Sri Narasimha Swamy of that village, often oblivious of himself and his surroundings. Seeing their son being a scholar in all the shastras and stotras, even without a formal education, his parents knew that there was divine grace with their son and were extremely happy. When he was silently craving for a Guru who would lead him properly into the highest echelons of devotion and unconditional surrender, a mahatma by name Dhumu Narasimha Dasa came to him, initiated him into the Taraka mantra and put him in the path of Hari Nama Sankeertan.

Unlike conventional sages and monks who submerged into arduous exercises like isolation in forests and austerities of ‘silence, deep penance and solitude’, Sri Venkatadri Swamy had a strong yearning to uplift simple and suffering community by influence of his compassion, divine love and holy music. Reflecting the prime motive of “involvement and service to divya desams and archavatharas” (temples and deity forms), of Sri Vaishnava tradition, he was continuously engaged in visiting temples and unconditionally singing the glory of the Lord

With the desire to rejoice the radiance of Sri Rama, Sri Venkatadri went to Bhadrachala and stayed for five years immersing himself in Hari Nama Sankeerthan. The collective auspiciousness of divine abode, sacred Godavari and devout association inspired Swami to inscribe one crore Rama namas and shower numerous keerthans in glory of Rama. His love was so dynamic that it stirred Sri Rama himself to appear in Swami’s subconscious vision to appreciate his merits. He proceeded to Thirumala, on the Bagulasapthami day of the month of Chithra in the year of Dharana (1824) and engrossed himself in floral service for a few years, along with his Divyanama Sankeerthans.

Kanchipuram visit was source of grand transformation in his life. Lord Varadaraja Perumal induced Venkatadri Swami’s ecstatic buds by His gracious appearance in the temple, with His consorts, Sri and Bhu devis, accompanied by devotees and scholars. An overwhelmed Swami started dancing escorted by his magnificent songs such as ‘Jaya Jaladhara Shyama’.

He, who considered wealth as a tinsel and evil, started accepting donations from devotees and with that money, he started doing simple services that ended in herculean contributions.

• Starting with pushpa kainkarya(floral services), he went on to offer fragrant sandalwood paste and created a foundation to offer boiled milk to the lord on a daily basis. Being apprehensive about possible issues of delay, quality deficit and devotion deficit in offerings, Swami personally submitted them with utmost love and devotion, staying in the room on the banks of Brahmatheertha pond by the side of Senai mudhaliar Sannidhi in Kanchipuram, which is even now remembered as Sri Venkatadri room.

• He also undertook renovation works in divya desams of Kanchi. His most remarkable contributions are Vilakkoli perumal Sannidhi mandapam and gopuram works.

• As an ardent promoter of Vedic education, he made a permanent charity for Vedaabhyasa of children, by the income generated from lands he purchased from his collections.

• He bought a land in Doosi Mamandoor for Rs.5000, which was a very huge sum on those days, and offered it for ensuring the purpose of the endowments commenced by him.

• The merciful and mischievous Sri Varadaraja appeared in Swami’s dreams and ordained him to offer a diamond crown. Despite many hardships he completed the wish of the Lord. Even today this crown, designated after the donor as ‘Sri Venkatadri crown’, adorns the Lord as the jewel of jewels. The same night, the impatient divine consorts of the Lord, Sridevi and Bhudevi, appeared in his dream and wanted crowns for them also. With their grace, Sri Venkatadri swami accomplished the task with utmost ease and soon Kanchi visualized the gorgeous procession of Lord and His consorts, embellished with precious and pure diamond crowns.

Other notable works carried out Venkatadhri Swami were:

• As old age took over him, Swami made Srirangam his base and restricted his activities to ‘offering sandal paste’ by self-grinding, gathering perfumes, and offerings like atirasa, vada, surulamudu, paalamudu.

• A scheme was also systematized to offer ‘aravana’ Prasadam, daily to Sriranga Nachiar

• To ensure that these were continued without hindrance, he purchased wetlands to an extent of 25.35 acres and dry land to an extent of 2 manas at a cost of Rs.5,050/- in the Thirupparaithurai Village. The edict on this event is available in front of the Dhwajastambha (holy pillar) in the temple.

Swami, a complete soul, spent his lifetime in absolute austerity and assumed ‘Sanyasa’ renounced order at his ripe old age of 72 by accepting the additional gadgets-conventional ochre robes and triple staff (Kaashayam and Tridandam) from Sri Ranga Narayana Jeeyar and came to be known as Thiru Venkata Ramanuja Jeeyar. By renunciation of such a detached and dedicated personality, the mendicant order itself got sanctified and invigourated. He lived with his service motive and never bothered about any second element. High officials, rich traders and great scholars were astonished to see the simple and silent person behind incredible service records. Many dignitaries and celebrities surrendered to Swami’s love, lore and luster.

In Dhatu year (1877) on the midnight of Monday, during the Maasi Saptami tithi, while chanting the Divine Ashtakshari Mantra, a divine light emanated from his head and he attained the Lotus feet of the Lord. His divine form was befittingly decorated and given due respects and rites fit for a Mahatma, by the Thiruvarangam temple authorities. Even today, on his memorial day, his offerings are sent to his Brindavana(abode of his final rest) and brought back after the ceremonies. Sri Venkatadri swami is the only person available with all vibrant traits of a saint (Jeeyar swamy), composer-singer (vaggeyakaara), devotee and contributor par excellence (bhaktottama and kainkarya para) put together. He is the best role model for all votaries, aspirants and beginners. His life history portraits Supreme’s craze and love for his genuine devotees rather than vice versa. His songs are free from imagination, ostentatious vocabulary, complex prosody and technical superfluity. Yet, they had the power to demand and command Sriman Narayana to shower his mercy and grace. He is different from other composers, for he has never mentioned or hinted his name in any of his songs. This strongly validates the domination of divine instigation and immanence in his melodies. 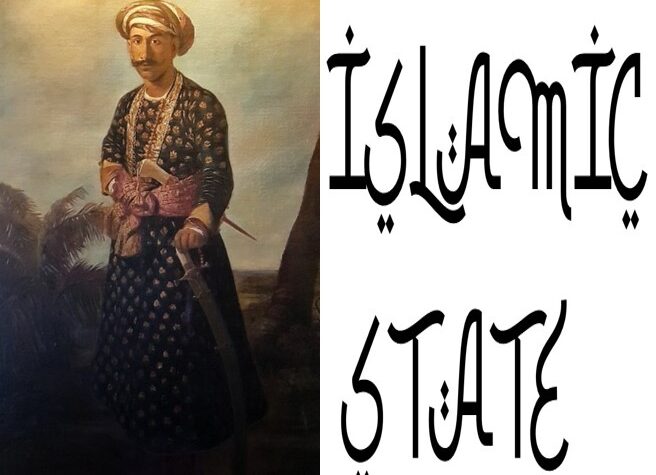 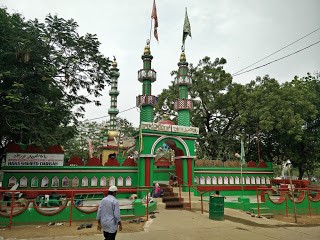