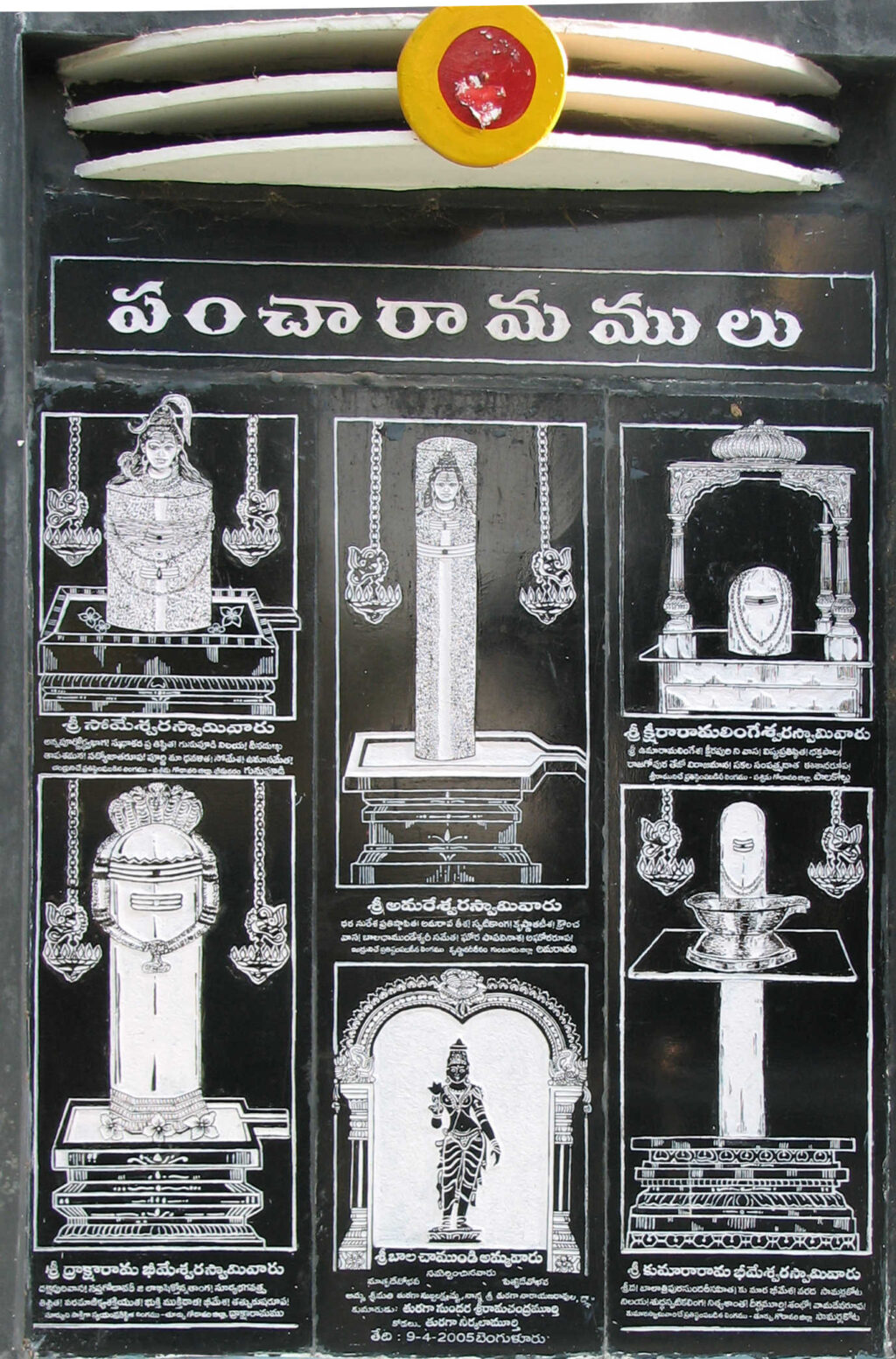 There is a series of temples in north coastal Andhra Pradesh dedicated to Shiva. These are famous as the Pancharama Kshetras. That they form a connected series is evident from the sthala puranam describing them.

All of these temples are of great antiquity. Definitely dating atleast to the era of Bhima I of the Eastern Chalukyas.  892 – 921. Somewhat radically differing alternative forms of the sthala purana are available. Some of these maybe related with some degree of relevance to specific cultural questions of the historcal period that they relate to. But there are other forms of the purana that have no such obvious association.

Diti, the mother of the Daityas was aggrieved and  about the destruction of the army of the Daityas, her children, by the Adityas, sons of Aditi. And she prayed to her husband, Kasyapa Prajapati, that she must have a son would would reverse the fortunes of the Daityas and reestablish their supremacy over the three worlds. Her prayer was granted and to her was born a son named Vajranga (hard as diamond). The name is also reported as Vajranka in some variations of the purana (shiny like diamond).

Vajranaga lived in the forest with his wife Varangi. Once, while Vajranaga was immersed in tapasya, Indra assumed the form of a mighty monkey, went to his hermitage and uprooted a large part of the forest nearby. He then took the form of a sheep and ate up everything that was green. He then took the form of a snake and attempted to bite Varangi. Varangi patiently endured all of this. When Vajranaga came back from his tapasya, he was enraged to see Varangi in such distress. He called upon Brahma for help. When Brahma finally appeared, he asked for a son who would defeat Indra and be a torment to the devas. Brahma granted him this boon. Varangi and Vajranaga soon had their prayer answered. Vajrangi’s womb was blessed by a mighty rakshasa who stayed in Varangi’s womb for a thousand years. When he was born he was named Taraka, the one who rescues (the rakshasas i..e). They also had two other sons named Surapadman and Simhamukha.

Tarakasura undertook a severe tapasya lasting thousands of years to invoke Shiva. Eventually the effort bore fruit, Shiva gave him darsana. Tarakasura asked that he must only be killed by Shiva’s son. He knew that Shiva’s wife, Sati, had just died childless and Shiva wasn’t planning on marrying again. Shiva granted him the boon. Thus, Tarakasura became invincible.

With the help of his brothers, Tarakasura mounted a vigorous attack upon the devas. Soon, all the devas including Indra had been defeated. Tarakasura and his brothers conquered Swarga.

The devas knew about Tarakasura’s boon. But they also knew that after Sati’s self-immolation, Shiva was not going to marry again. But Sati Devi was reborn as Parvati, the daughter of Himavan the mountain king and Mena. Parvati knew from an early age that she must be united with Shiva. And at an early age she started her Tapasya to win Shiva’s favour. After intense tapasya by Parvati, Shiva and Parvati were finally wedded. But still Shiva was not to be drawn into worldly affairs. He would produce no children through this union. The Devas assigned Kamadeva to the objective of bring about this union. But Shiva, in wrath for so rash an intrusion upon his meditation, burnt Kamadeva to ashes. But yet he became aware of the divine role that his offspring must play in the war between the devas and the asuras. And so he gave his seed to Agni who was expected to have the strength to bear so fiery a material. It happened that even Agni was no match to the fiery energy of this divine seed. So he had to let it go in the Ganga. And upon the banks of the Ganga, amongst reeds of Shara grass, Kartikeya, also known as Sharavana, the son of Shiva, was born.

But Tarakasura was not to be easily vanquished. Sri Mahavishnu then advised Kartikeya that Tarakasura had a mighty shivalinga in his throat (Vishuddhi Chakra). This must be destroyed. Kartikeya aimed his Agneyastra at this spot and destroyed the Shiva Linga. This ended Tarakasura’s strength and he was promptly destroyed. Kartikeya soon killed Surapadman and Simhamukha. Liberated from their mortal forms,  Surapadama became the peacock, the mount of Kartikeya, and Simhamukha became the lion the mount of Parvati.

The Shiva Linga located in the throat of Tarakasura broke into five pieces and fell at the five places that became the Pancharama Kshetras located in the present Andhra Pradesh state.

An alternative version of the purana states that the five pieces of the Shiva linga came from the destruction of Tripurasuras.

Tarakasura had three valiant sons named Tarakaksha, Kamalakaksha and Vidyunmali. There are alternative names that are listed in other versions of the story. But it is always a list of three sons.

When Tarakasura was dying, he had his sons take an oath of vengeance upon the devas.  Ofcourse it was in their nature to find means to torment the devas. And the devas,for having killed their father,  were also the natural enemies of the three brothers.  The oath was a mere formal start for what what was already an immutable resolution.

These three began to perform tapasya. For several thousands of years they kept on their quest. Indeed what they desired was a difficult goal. Brahma was pleased with this most intense tapasya. He gave them darshana. “Make us immortal”, asked the three asura brothers. “I can’t make you immortal”, replied Brahma. “I don’t have the power. Ask for something else instead”.

“Grant us the following, let three forts be made. The first of gold, the second of silver and the third of iron. We will live in these forts for a thousand years. These forts built in different worlds shall align once in every 1000 years. This combined fort will be called Tripura. And if anyone can then destroy Tripura with only a single arrow that shall be the death destined for us”.

This rather unusual boon Brahma granted. There was a danava named Maya who was very good at building work. Brahma asked him to build the forts. The golden fort was built in heaven, the silver one in the sky and the iron one on earth. Tarakaksha got the golden fort, Kamalaksha the silver one and Vidyunmali the iron one. Each of the forts was a big as a city and had many palaces and vimanas inside.

The asuras populated the three forts and began to flourish. Now they attacked the devas and Indra had to flee his city of Amaravati. The devas approached Brahma, but Brahma said he could not help them. After all, the demons had got Tripura thanks to his boon. The gods then went to Shiva for help. But Shiva said that the asuras were firm in their vedic and occult practices. As long as that was the case, he did not see what could be done. They next went to Vishnu, who suggested that if the problem was that the demons were steadfast in their yajnas, then the solution was to persuade them to become sinners.

Out of his powers Vishnu created a man who could persuade the asuras to drop their adherence to the vedic instructions. “Teach them that there are no rules of karma, no causation, no righteousness. Emphasise the apparent and deride the transcendent. Offer them an extensive literature in simple language that appears like an authentic philosophy. Go to Tripura and teach the demons this religion, by which they will be dislodged from the righteous path. Then we will do something about Tripura”.

The being did as he had been asked to. He and four of his disciples went to a forest that was near Tripura and began to preach. They were trained by Vishnu himself. Therefore, their teachings were convincing and they had many converts. Even the sage Narada got confused and was converted. In fact, it was Narada who carried news of this wonderful new religion to King Vidyunmali. “King” he said, “there is a wonderful new teacher with a wonderful new religion. I have never heard before. I have been converted.”

Since the great sage Narada had been converted, Vidyunmali also accepted the new religion, and in due course, so did Tarakaksha and Kamalaksha. The demons gave up revering the Vedas, they stopped worshipping Shiva’s linga. Now the gods then went to Shiva and began to pray to him. When Shiva appeared, they told him that the demons had now become evil and should be destroyed. They had even stopped worshipping Shiva’s linga.

Shiva agreed to destroy Tripura. Vishvakarma was the architect of the gods. Shiva called Vishvakarma and asked him to make a suitable chariot, bow and arrow. The chariot was made entirely out of gold. Brahma himself became the charioteer and the chariot was speedily driven towards Tripura. The gods accompanied Shiva with diverse weapons.

When Shiva’s army reached the battlefield, the three forts were about to merge into a single Tripura, which condition would last for just a second. At the exact time, Lord Shiva invoked the most destructive weapon controlled by Him, the Pashupatastra. The destroyer’s capable arms fired a single arrow into the three forts at the exact instant they merged into one, thus burning to ashes the three forts of the asuras. Shiva thus earned Himself the epithet Tripurantaka – the one who ended Tripura. He also earned the epithet Tripurari. Other versions offer that the astra used to destroy the tripuras was the Aghorastra.

Another version that is widely quoted in Tamil literature has Lord Shiva destroy Tripura with a mere smile. When all the battlefield was filled with warriors, with Brahma and Vishnu in attendance, there occurred the instant when the forts came together. Lord Shiva merely smiled. The forts were burned to ashes. The battle was over before it began! In Tamil, Lord Shiva has the epithet, “Sirithu Purameritha Peruman” which means, He who burnt the cities with a mere smile.

While the celebrations were going on, the shaven-heads religious teachers arrived. “What are we supposed to do now?” they asked. Brahma and Vishnu told them to go the desert where there are no humans. The last of the four eras was kaliyuga and in kaliyuga, evil would reign supreme. When kaliyuga arrived, they were to come back and begin their teaching afresh. And once they reached the peak of their power, god will take rebirth and will release them from their burden. And the asuras would be cleansed from the earth.

Another Story about the Tripurasuras

The asuras were deeply indignant about the trick by which they were denied Amritam. So they had the Tripurasuras practiced tapasya for Brahma. Having gained his favour, they rapidly gained dominance over the devas and tormented all existence with their brutal tendencies and impositions. Shiva then resolved to destroy the asuras. This he did at precisely the right moment with his Pashupata astra. The three cities that the asuras built had three lingas that would merge into a single form. This linga was broken by the Pashupata, into five pieces. And they fell at the locations that became the Pancharamas.

In both versions of the story, Shiva destroyed the Shivalinga that was the source of the power of the Asuras. In the case of Tarakasura, it was a linga in the throat of the asura. Whereas with the Tripurasura, it was a linga formed by the union of three separate lingas.

The Shiva Linga was broken to five pieces and it fell in five places the Pancharamas. These five pieces were santified by five devatas. These locations are located in Andhra Pradesh, in the two Godavari districts and in Guntur District. 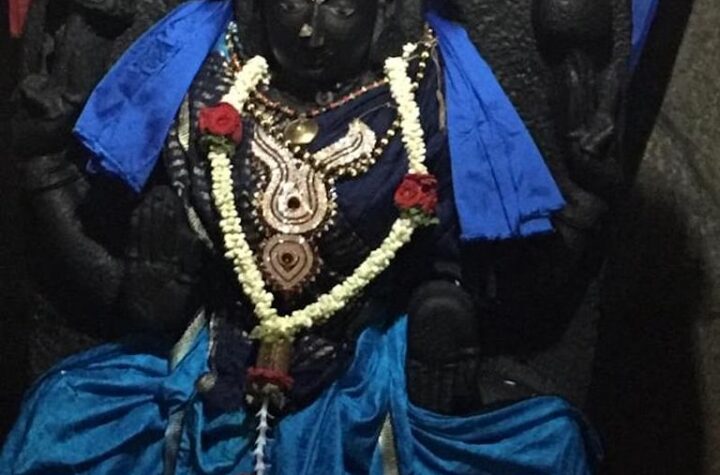