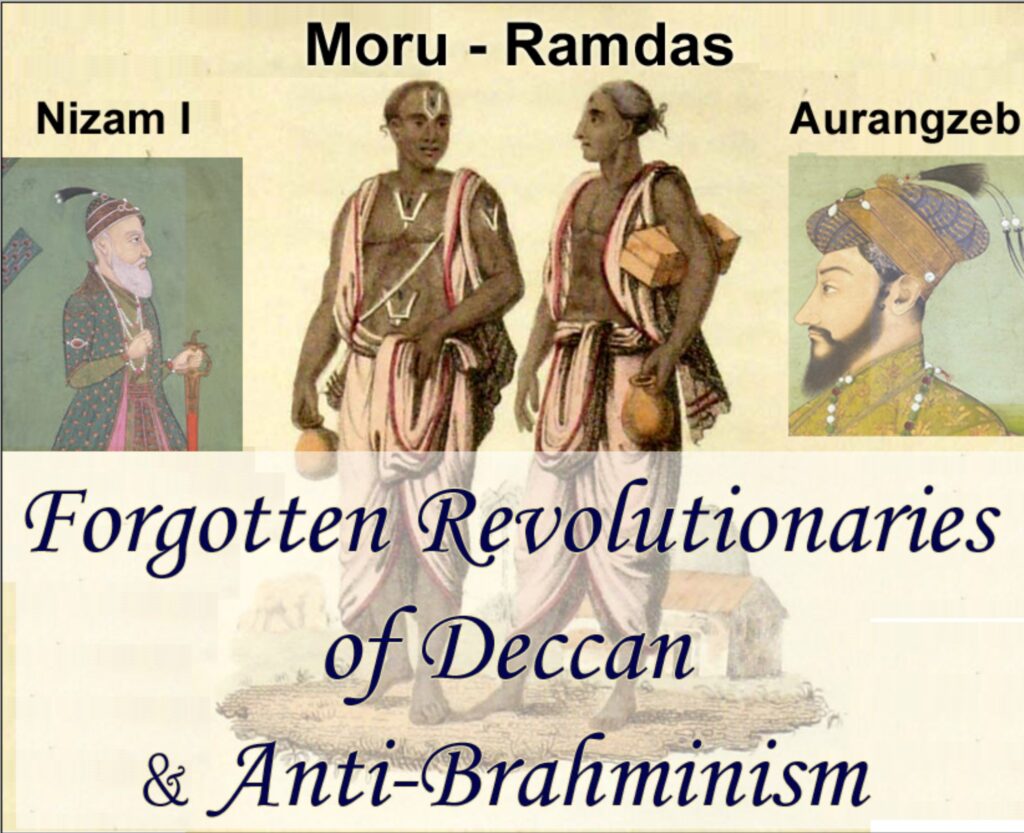 The last testament of Nizam Asaf Jah I Mir Qamruddin Khan is an interesting document. In course of seventeen instructions, it mentions five persons by name and singles out two communities for special treatment. Of the five persons mentioned by the Nizam two are Muslims and three are Hindus. Perfectly ‘secular’, one might imagine, but for a certain asymmetry of treatment.

One Muslim mentioned is Aurangzeb, who is cited 2-3 times as an authority for the advice tendered by the Nizam. The second Muslim mentioned is a wayward son, who is recommended to kind treatment at the hands of his successor. The third person to find mention is the Hindu Puran Chand. The Nizam defends his appointment as Dewan, in spite of his ‘inferior’ origins, on grounds of his efficiency in revenue collections and recommends that he be continued for another 2-3 years. The other two Hindus that the Nizam mentions are ‘Moro’ and ‘Ramdas’, of whom more later [Husain 1936,1963].

The primary concern of the dying Nizam is the pre-eminence of Islam. He begins his testament enjoining the ruler of Deccan to ‘maintain pre-eminent the dignity and prestige of Islam’.  With this overarching concern, he enjoins peace and agreement with the Marathas while keeping Islam pre-eminent and says that Marathas were zamindars who should not be allowed “to over-step the bounds”. Specifically ‘these free-booters’ i.e., Marathas were to be denied any conquests in the Deccan. [Husain 1936,1963]

It is not surprising that the first Nizam worried about Marathas when thinking of supremacy of the prestige of Islam. Marathas were the most formidable power in Deccan after 1740. What is unexpected is that the Nizam mentions another Hindu community, in addition to the Marathas – the Brahmins of Deccan, in the fifteenth point of his testament

The fifteenth point of Nizam’s testament is translated differently in two accounts, both of which are reproduced below:

“…the Brahmins of the Deccan, although able, are fit only to be locked up in prison, on account of their rebellious attitude. … Hazrat Khuld Makan (the Emperor Aurangzeb) had also observed the same.

They have two ring-leaders … Moru and Ramdas, who are the upsetters of this Muslim state. I have confined these two in the fort of Ahmednagar …  in their continued confinement lies our well-being.  By Pandit Khana is meant the prison where all these people are kept. Since the time of Hazrat Alamgir Padshah, the standing order has been that wherever a refractory Brahmin is found, he should be taken away forthwith and imprisoned.” [Husain: 1936,1963]

According to Tajalli Ali Shahi, the fifteenth point is:

“The Dakhini Brahmins are all fit to be killed and their heads severed.

Special  mention should be made of two leaders (sar-i guruh) of this community: one is  Moru and the other is Ramdas. These two have been undermining the state  (daulat) for a hundred years. I have imprisoned them… They should never  be released! The word Pandit Khana is well known in the world. It means the  house of imprisonment of this community” [Faruqui 2009]

The difference between the two translations is obvious. Husain’s version wants brahmins imprisoned on account of their rebellious attitude. Tajalli’s translation would have all Dakhini Brahmins killed and beheaded. Their attitude does not matter. Between the two, Husain’s translation seems more convincing because Tajalli poses some puzzles: How could Moru and Ramdas undermine the state for a ‘hundred years’ and still be imprisoned by the Nizam. Further according to Tajalli, pandit khana had world renown, whereas this seems to be the only documented reference to it. Whichever translation is taken as accurate, Nizam’s anti Brahminism is apparent, vicious and vituperative. Several points of interest stand out.

1) The first Nizam’s anti-Brahminism was a continuation of Aurangzeb’s policy. That he could not put his views into practice was merely the result of adverse circumstances, not due to any difference with Aurangzeb. Even non-committal Faruqui admits that Nizam’s actual policy may have been a dissimulation induced by the need for qualified administrators, the number of Hindu subjects and the fate of Aurangzeb’s religious policies [Faruqui 2009].

2) Aurangzeb maintained a special jail or jails, called Pandit Khana(s), in which he imprisoned Brahmins who had a ‘rebellious attitude’ towards the rule of Islam. This was his ‘standing order’, either in Deccan only or in all his dominions.

3) The Muslim state of Deccan was being upset by two ‘ringleaders’ – Moru and Ramdas. Both were imprisoned in Ahmednagar by Nizam I.

4) Nizam I was so fearful of freeing these two Brahmin revolutionaries that he had to warn in his testament that “…  in their continued confinement lies our well-being”.

5) Nizam’s views on Deccan Brahmins form a continuum with the premeditated wide-spread pillage and massacre of Brahmins from Hyderabad to Masulipatnam in 1685. This continuum suggests a shared knowledge with his father Ghaziuddin (Shihabuddin) Khan who was Aurangzeb’s general in the Golkonda campaign that followed 2 years after the great Brahmin massacre.

6) Anti-Brahminism in Andhra Pradesh is a legacy of Aurangzeb and continues to be pursued by those who are affiliated Aurangzeb’s followers. This aspect should give one pause to think.

For those who are not aware of the Brahmin Genocide of 1685, some details that are available are given below.

THE 1685 MASSACRE & PILLAGE OF TELUGU BRAHMINS

Madanna, a brahmin from Warangal, was prime minister of Sultan Abul Hasan Tana Shah of Golkonda. He and his brother Akkanna tried to mobilise Deccani Muslims and Hindus against foreigners like Afghans and Arabs according to historian Siddiqui [Kruijtzer 2008]. They developed good relations with Deccani Shiahs, who were sore with Mughals for humiliating them and suppressing their religion. The brahmin brothers and the Deccan Muslims also cooperated on occasion with the Marathas. Tana Shah and Madanna arranged a grand reception of Chatrapati Shivaji in Bhagyanagar in March 1677 and supported his invasion of the south in 1677 [ibid.].

A couple of years after the demise of Shivaji Maharaj, Aurangzeb declared Jehad in Deccan. Deciding to subjugate the Marathas, he sent an army under his son with a written message to his supporters in Golkonda in 1685, asking them to curb the power Madanna and Akkanna. Sunni Afghan and Arab supporters of Mughals then murdered the two brothers, reportedly beheading them and sending their heads to the Mughals. They then engaged in a widespread massacre of brahmins all the way up to Masulipatnam, robbing their property. The magnificent Shiva temple complex at Maheshwaram was destroyed during this genocide [Kruijtzer 2008].

A historian says that this great loot and massacre of Brahmins is the first reported instance of Hindu-Muslim “riots” in Hyderabad, which had seen only Shia-Sunni riots earlier [Kruijtzer 2008]. The fifteenth point of the testament of Nizam I, suggests that the great 1685 Massacre of Telugu Brahmins may have been induced by or approved of by Aurangzeb. The Nizam would be in the know since his father played a leading role in the Mughal invasion of Golkonda that followed two years later.

Anti-Brahminism in the Telugu land originates with Aurangzeb and its legacy continues with those who connive with the legatees of Aurangzeb, in India and abroad. Moru and Ramdas are the forgotten Brahmin revolutionaries, ‘ringleaders’ of a conspiracy or uprising that unsettled the Muslim state in Deccan, alarming even the redoubtable Nizam Mir Qamruddin. More research is needed to recognise their personalities, life and work.