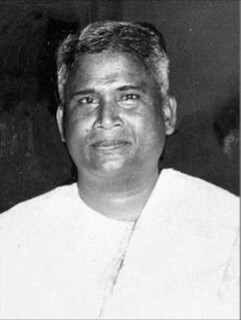 P. Kakkan (18 June 1908 – 23 December 1981) or fondly known as Kakkanji, was an Indian politician and freedom fighter who served as a member of the Constituent Assembly of India, Member of Parliament, President of the Tamil Nadu Congress Committee and in various ministerial posts in Congress governments in the erstwhile Madras state between 1957 and 1967.

The Indian independence movement brought to fore great souls who were selfless and honest. While many of them resigned back to peace after independence, others ventured into politics. Not to make money or name for themselves, but to provide a better life for the suffering and the unprivileged. Though a few of them are still remembered today, most of them have been wiped off from the pages of history. One such man is P. Kakkan.

Kakkanji was born into a Dalit family on 18 June 1908 in a small village called Thumbaipatti near Madurai. He did his primary schooling in Melur – the town closest to his village – before moving to Madurai for higher secondary education. He seemed to have failed the SSLC exam and thereafter, worked as a teacher before becoming a social worker. He was married to Parvati with whom he fathered five sons and a daughter. He was deeply religious as his father was a Poojari in a local temple in the village. As such, he rejected Periyar’s ideologies and methods. When E.V. Ramasamy Naiker, the leader of the Self-respect movement publicly declared his intention to organize a Dravidar Kazhagam procession to the Marina in order to burn pictures of the Hindu God Rama, Kakkan warned Periyar that the desecration of images would constitute an “anti-social act” that would forsake the strong faith in God by which Gandhi won independence for India.

Inspired by Gandhi, Kakkan joined the Congress in his student days. Along with Kamaraj, he led several protests against the British in the 30’s and the 40’s. He also participated in the Quit India movement and was jailed in Alipore for a while.

Kakkan fought all his life for the unprivileged and against untouchability. When the Rajaji Government brought forth the Temple Entry Authorization and Indemnity Act 1939 which removed the civil and social disabilities against the depressed classes, Kakkan led the temple entry at Madurai.

Kakkan served as a minister for two terms in the Congress government of Tamil Nadu between 1957 and 1967. As a Public works minister, Kakkan played an important role in the expansion of mettur and vaigai reservoirs. Both the dams were strengthened during his reign. As a minister for Harijan/SC/ST welfare, he formed a Harijana Seva Sangham for the welfare and upliftment of the suppressed. As a minister for Agriculture, he established two agricultural colleges in Tamil Nadu.

After losing the assembly elections in 1967, Kakkan retired from politics and resigned himself to a simple life. He did not amass any wealth and always travelled by bus till his death. He did not have any property in his name. When age caught up with him and illness weakened him, Kakkan was admitted to the government hospital in Madurai where he spent his last days alone in the veranda of the hospital. When MGR, the then chief minister, visited him, he denied the CM’s request to move him to the special ward because he could not afford it. Until his death in 1981, he lived in a rented house in Chennai. He was truly a symbol of austerity.