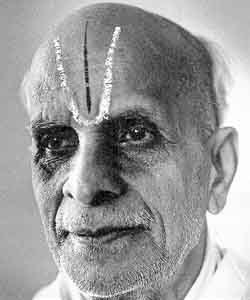 Sixty years ago, the Sri Venkateswara University invited a scholar who had just then retired from the Maharajah’s College in Mysore, to head its Department of Music. The personage, or sage as some would have averred, was the apt choice, for he had not only a sound knowledge of music, but also of Sanskrit, Prakrit, Telugu and Kannada. On coming over, he applied himself to the main task at hand, that of setting to music the songs of Annamacharya, the great composer of Tallapaka. This personality was Rallapalli Ananthakrishna Sarma. Commissioned to retrieve the songs of Annamacharya, Rallapalli Ananthakrishna Sarma worked in earnest setting them to tune and publishing volumes. Sarma was of the view that the sringara compositions of Annamacharya were not being given the same importance as the spiritual.

Born on January 23, 1893, at Rallapalli in Anantapur District to Sanskrit and Telugu scholar Karnamadakala Krishnamacharyulu and Alamelumangamma, Sarma was initiated into Sanskrit, Telugu and music by his parents. Resenting unchavriti (ritual alms seeking) he ran away from home at the age of 13. Reaching Mysore, he placed himself under the guardianship of the chief of the Parakala Mutt. Guided by the seer, he studied Sanskrit and Prakrit at the Chamaraja Pathasala and became a master in both languages. He also studied music under the palace vidwans such as Chikka Rama Rao, Bidaram Krishnappa and Karigiri Rao. He could sing and also play the violin and the flute.

When Sarma was barely 18, his talent in Telugu was noticed by Sir Cattamanchi Ramalinga Reddy, the Principal of the Maharajah’s College, who appointed him Telugu Pundit. His love for teaching and his mastery over his subjects ensured he received the love and affection of his students. During his tenure there, Harikesanallur Muthiah Bhagavatar, though many years his senior, often consulted him on the musical and lyrical aspects of the project that he was then working on – Chamundamba Ashtottara kritis.

Sarma joined the Sri Venkateswara University in 1948. The Tirumala temple authorities had the previous year begun retrieving the songs of Annamacharya that had been stored for centuries on copper plates in the temple. The work was headed by Vetturi Prabhakara Sastry, well-known scholar who passed away. Sarma was then brought on board to head the project. He had first seen some songs of Annamacharya in 1937 and had even then been enamoured of their unique imagination, independent flow of words and variety. Beginning with ‘Alarulu kuriyaga adenade’ which describes the dance of Alamelumanga for the pleasure of Srinivasa, Sarma worked in earnest on the songs, setting them to tune and helping in the publications of volumes seven and eight of Annamacharya’s compositions.

In 1949, the first Vardhanti festival of Annamacharya was celebrated by the Tirumala Tirupati Devasthanam and from then on the demand for the composer’s songs grew. Between 1951 and 1956, Sarma brought out five more volumes of Annamacharya’s compositions. He wrote the notation for 108 compositions and 87 of them were published in the Andhra Patrika Weekly.

In 1974, Sarma was conferred Sangita Kalanidhi by the Music Academy, Madras. He took the honour in his stride but it gave an opportunity for the citizens of Madras to meet, observe and listen to a scholar. His speech on the occasion of his being elected to preside over the Music Academy’s annual conference was a fine one, remarkable for its masterly summing up of the music scenario at that time and his arguments in favour of change especially in breaking free from the shackles of tradition.

Dr Rallapalli Ananthakrishna Sharma was a composer in his own merit. He has composed many musical forms like Geetam, Swarajati, Varnam, Kriti’s & Tillana, in popular and rare ragas. His compositions, unfortunately, have not come to light, largely due to his own reluctance to give them publicity. He did not sing them in public, did not teach them to his disciples and made no attempt to print and publish them. He taught some of them to his daughters, only to be sung during their daily worship and on festival days such as Sri Ramanavami, Sri Krishna Jayanthi, Varamahalakshmi Vratam and the like. When asked by his younger son, R.A.Jayantha, why he should not publish them, he replied, “I did not compose them for publication. I wrote them when I felt impelled to do so by some divine force”. When further questioned whether they would not be lost permanently if they are not published, he answered,” Lord Srinivasa at whose calling I wrote them, will himself take care of their welfare”. He has several publications and literary works to his credit spanning over the fields of Literature and Music, and in languages like Kannada, Telugu, Sanskrit etc.

A Spartan lifestyle saw Sarma remain healthy and active till the very end. On his last day of life a strange thing occurred. At about 4 pm, a representative of Tirupati Temple came to his residence and handed over an award—Sangita Sahitya Asthana Vidwan and the Prasadam. Sharma received all these and passed away at 7.15 p.m., in Bangalore on 11th March 1979. By then Annamacharya’s songs had become famous and several including M. Balamuralikrishna and Nedunuri Krishnamurthy had set them to music and were regularly singing them in concerts. That said, it must also be placed on record that it was MS Subbulakshmi’s rendition of them, released as a series of audio cassettes by the TTD that made the songs extremely popular. Sarma lives on, in the songs of Annamcharya that he set to music.