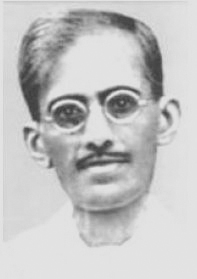 The limelight has so long been on that mathematical genius Srinivasa Ramanujan that few even recognise the name of another Maths scholar who hundred years ago this year sailed for Cambridge and returned to Madras to contribute significantly, and more practically, to Indian Mathematics. A not-so-well-known contemporary of Ramanunjan was K.Ananda Rau, a foundation member of Indian Academy of Sciences, Bangalore. His career had an altogether different kind of trajectory from Ramnujan’s.

District Collector Ramachandra Rao who had recognised Ramanujan’s genius was also responsible for encouraging his kinsman Ananda Rau’s mathematical talent. That talent took Ananda Rau to King’s College, Cambridge, in 1914 where, two years later, he got his Maths Tripos. Like Ramanujan, who became his friend there, Ananda Rau too became a ward of Prof. Hardy, who guided him in research. As a student he won the much coveted Smith Prize. His contributions to Maths knowledge led to him being elected a Fellow of the College.

Anand Rau was an outstanding analyst who worked a great deal on summability, an area in which Hardy was a leading figure. A theorem named after Anand Rao figures in Hardy’s book Divergent Series.

Returning to Madras in 1919, Ananda Rau became wedded to Mathematics in a way rather different to Ramanujan’s. Mathematics did not become a private obsession of his. Instead, he accepted a Professorship at Presidency when he was only 26 and devoted the rest of his life as much to research as to teaching the subject. In fact, his skills in teaching and administration led to him being made Principal, a post he held till his retirement in 1948.

Rau published several papers, primarily in three fields: summabilty of series, theory of functions of a complex variable and sums of an even number of squares. Among the first papers he wrote after his return was on the subject of the Reimann zeta and the technique devised by Rau was found to have wide applicability in other problems of number theory.

He was awarded the title “Rao Bahadur” on 11th May 1937, by the then Government of India.

Inspired by him, numerous students of his became leading mathematicians in India and abroad. This contribution had him being called the ‘Father of the Indian School of Number Theory’. He was from all accounts an inspiring teacher, held in great respect and affection by his students. Many of whom went on to become fine mathematicians themselves: some among them were leaders on the Indian scene. Ananda Rau taught several well-known mathematicians, including S Chandrasekhar, K. S. Chandrasekharan, S Minakshisundaram, C T Rajagopal, C S Venkitaraman and M V Subbarao. His students regarded him as an inspiring teacher who emphasized that mathematics is an activity requiring immersion and dedication and is not for spectators. The story of Indian mathematics beyond Ramanujan begins with Rau and it is essentially Rau’s students and descendants who constituted the Indian school of number theory.

Anand Rau retired from service in 1948 at the then mandatory age of 55, but remained mathematically active for more than a decade after that. He passed away on 22nd January 1966.

In the face of the overwhelming attention to Ramanujan’s genius, Ananda Rau’s commitment to spreading wider mathematical knowledge and encouraging the conquering of new frontiers in the subject has got rather lost, it would appear.