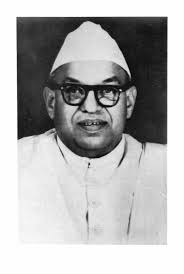 Stepping in to fill the void created by the sudden demise of G.V. Mavalankar, the first Speaker of Lok Sabha, Shri M. Ananthasayanam Ayyangar proved himself well suited to carry on the unfinished task of consolidating the gains of freedom and of evolving a healthy parliamentary culture in the new Republic. Through a public life spanning over six decades as a lawyer, as a social activist and freedom fighter, as an outstanding parliamentarian and Speaker and as a distinguished scholar, Ayyangar left an indelible imprint of his personality in every area he chose to tread on in life.

Madabhooshi Ananthasayanam Ayyangar was born on 4 February 1891 at Tiruchanur near the spiritual town of Tirupati in Andhra Pradesh. After completing his initial education in the Devasthanam High School at Tirupati, Ayyangar moved to Madras for higher studies. After obtaining his B.A. degree from the Pachaiyappa’s College, Madras, he earned a degree in Law from the Madras Law College in 1913. Ayyangar began his career as a Mathematics teacher in 1912. In 1915 he ventured into the legal profession. Within a short period, he established himself as a professional lawyer and, with his unusual ability to memorise cases, soon earned the reputation of being a ‘walking digest of case laws’. Ayyangar did not treat the profession only as a means to earn his livelihood. He was deeply interested in improving the judicial system of the country to suit the needs of the people of India rather than see it as an extension of the British judicial system. He, therefore, strongly advocated independence of the Judiciary and urged the Government of India to raise the status of the Federal Court to that of a Supreme Court. He was very much concerned about the humiliation as also the hardships faced by the Indian people due to the vesting of the ultimate appellate authority of India’s judicial system in the hands of the Privy Council in England, An activist lawyer, Ayyangar was also the President of the Bar Association of Chittoor, his home town.

Ayyangar was drawn into the freedom movement at a very early age. Within his home State, he was one of the leading figures of the Indian National Congress which was spearheading the National Movement against British colonialism. Responding to Gandhiji’s call for ‘Non-cooperation’ with the British establishment, Ayyangar suspended his legal practice for one year during 1921-22. When the Congress withdrew its policy of boycott of Councils and decided to contest the elections for the Central Legislative Assembly in 1934, Ayyangar was elected to the House with an overwhelming majority. The objective of the Congress in contesting the election was to fight the Government from within. Well-equipped with facts and figures and by his innate debating skills, Ayyangar soon made his mark as a forceful debater in the Assembly. From the back benches, he moved on to the front benches and then came a time when not a single day passed without his saying something forceful in the Assembly against the Government and in the interests of the Congress and the National Movement. This remarkable performance of Ayyangar in the Assembly provoked a European writer to refer to him as the ‘Emden of the Assembly’, alluding to the German submarine of that name, which caused untold havoc to the Allied Navy in the early days of the Second World War.

Between 1940 and 1944 Ayyangar suffered imprisonment for nearly three years, first for taking part in the ‘Individual Satyagraha Campaign’ and later in the ‘Quit India Movement’ of 1942. Apart from taking active part in the movement for political freedom for the country, Ayyangar was involved in various other activities directed towards the social emancipation of the downtrodden sections of the society. Inspired by Gandhiji’s constructive programmes for fighting social evils like untouchability, Ayyangar was in the forefront of such movements launched to ensure temple entry for the Harijans and the abolition of untouchability in his home State. Later, in his capacity as the President of the Harijan Sevak Sangh, Ayyangar initiated several programmes for the economic and social upliftment of the Harijans.

When the First Lok Sabha was constituted in 1952, Ayyangar was the unanimous choice to be its Deputy Speaker. While discharging his duties as the Deputy Speaker, Ayyangar had the added responsibility of being the Chairman of the Estimates Committee of the Lok Sabha for two more years and that of heading the Railway Convention Committee in the next two years until he was elected unanimously to preside over the Lok Sabha on 8 March 1956, on Speaker Mavalankar’s sudden demise.

During his brief tenure as the Speaker of the First Lok Sabha, Ayvangar had proved himself a worthy inheritor of the high traditions in parliamentary life established by Speaker Mavalankar. From the very beginning, it was Ayyangar’s constant endeavour to uphold and fortify the traditions and conventions already brought into India’s parliamentary system. Through his objective and unbiased conduct, he endeared himself to all sections of the House. Though there was no official Leader of the Opposition in the House, Ayyangar treated the stalwarts of the Opposition with the respect and regard due to them and always sought to ensure a balance between the Government and the Opposition. When the Second Lok Sabha was constituted in 1957, Ayyangar was once again the unanimous choice of the House to be its Speaker for the next five years.

Ayyangar was elected to the Lok Sabha for the third time in the General Elections of 1962. However, he resigned his membership soon after the elections to serve as the Governor of Bihar. That was to mark the end of the nearly three decade-long distinguished parliamentary career. Undoubtedly, through this long period of service, the institution of Parliament and the country in general benefited enormously from Ayyangar’s knowledge, his parliamentary skill and his broad vision of politics, religion and of national problems.

After parliamentary life, Ayyangar’s greatest contribution, perhaps, was in the field of education. An erudite scholar, Ayyangar was an authority on Indology, Comparative Religion, Philosophy, Sanskrit, Sanskrit Literature and on a wide variety of other subjects. Throughout his life, he took great interest in the study and propagation of Sanskrit and Indian Culture. He served for sometime as a Member of the Central Advisory Board of Education and later as the Chancellor of the Rishikul University at Hardwnr. Recognising his contributions to the field of learning, he was conferred the honorary degree of Doctor of Literature by the Shri Vaishnava Theological University, Brindavan, in 1954. Besides regularly editing a Telugu weekly Sri Venkatesa Patrika, Ayyangar also had a book on Indian Parliament, Our Parliament, to his credit.

After serving a full term as the Governor of Bihar, Ayyangar retired from active political life and returned to his hometown, ‘Tirupati, to spend the evening of his life. Even at this stage, Ayyangar remained very active. Work for the Sanskrit Vidyapeeth at Tirupati and several charitable organisations (like leprosy Home etc.) kept Ananthasayanam Ayyangar busy till he breathed his last on 19 March 1978, at the age of 87.