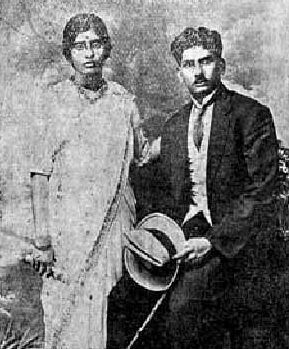 A slender manuscript in Telugu-prose was sent to Abburi Ramakrishna Rau by a friend for revision. It was written by Annapurna. It was a translation Bengali to Telugu of a few letters written by Aurobindo Ghose from his exile to his wife. Rau was himself learning Bengali and was sufficiently advanced in that language to be able to appreciate the lucid rendering of Annapurna into Telugu. The letters made a deep impression on him. He felt that the translator must have been even more deeply impressed. He realised how steadfastly and devoutly Annapurna must have cherished the great ideals held up in those letters of Aurobindo, which gave her the strength to dedicate herself to Gandhi and his great cause.

Annapurna Devi was born in 1900 of a middle class Telugu family. Annapurna’s mother, who lived after her daughter’s death is an ideal mother who never once tried to set any limits to the desire for service that was slowly growing in Annapurna. She was for sometime secretary, and is and an active worker, in the local Prarthana Samaj and many other institutions doing social service. Annapurna was the only daughter of her parents, and their indulgence to her was unbounded, as can be seen from her answer to Mahatma Gandhi on the occasion of her great sacrifice. When, in the memorable year 1921, Gandhi came on a tour to Ellore, she gave away her rich ornaments, bangles, and a heavy gold chain. Asked if she had the permission of her parents, she replied, ‘My parents do not interfere with me. They let me do as I like.’ In these days when women themselves exaggerate the frailties of women, it was no small advantage for Annapurna to have had such high-minded and indulgent parents.

She showed great promise even while a girl of seven. Dr. Govindarajulu, a friend who had watched the short and sweet drama of her life from beginning to end, says that her sweet temper and rare intelligence won the admiration of all that came into contact with her at that early age. Raly Seshagiri Rao of Ellore, a pious and devout seeker, was at that impressionable age, her guide, philosopher, and friend. He left so deep and abiding an impression on her, that she would very often in later years attribute all her strength and courage to the dynamic teaching of this Guru of her youth. Later, she also came under the influence of Adipudi Somanatha Rao, a great social reformer and poet.

Owing to her pronounced disinclination to go to school, Annapurna received her first lessons from her parents and was subsequently sent to the Mission School at Guntur. Having remained there for a little over two years, she was sent up to Calcutta on the advice of friends to study in the Brahmo Girls’ School. To meet her expenses, the parents managed to lay a little sum every month for their beloved daughter, the father by trading and the mother by sewing. While at Calcutta, she resided along with Srimathi Sakuntala Devi, now an M.A. and private tutor to the Maharani of Pithapur, in the house of Mr. Hemachandra Sirkar, the well-known Brahmo preacher. Mrs. Sirkar seems to have imposed upon her young wards a stern discipline – although by no means sterner than what Annapurna voluntarily imposed upon herself later – which had a chastening and purifying effect on them. While engaged in her school studies, she found real pleasure in cultivating the beautiful Bengali language with great enthusiasm. Her note-books of those school days which have been preserved, contain many noble sayings written in dainty Bengali script by herself and friends at school, who seem to have been a sort of intellectual family gathered together by happy circumstance. She could herself write an elegant hand in Bengali, and her many translations from that language testify to her fine sense of selection in trying to convey to her Telugu readers some of the finest things in the Bengali language.

After more than five years of study, her health broke down under the strain of an alien discipline and she came back to Ellore. A year later, she went up privately for the Matriculation examination of the Madras University, and being in great want, resolved to earn by her pen all the money she required for prosecuting higher studies. In 1917, she published a book of prose Sitarama, which was prescribed as a Text Book for the High School classes. While she was planning to pursue her literary labours with greater zeal, she again fell ill and had to go in 1919 to Madanapalle and remain there for a year. She came back healthy and strong. In 1920, she married Sri Maganti Bapineedu who was then studying in the City College, Calcutta. The marriage was a memorable event in the history of social reform in Andhra Desa. The marriage was celebrated in the distinguished presence of Umesh Chandra Vidyaratna, the famous Bengali reformer, and Adipudi Somanatha Rao.

Soon after marriage, Bapineedu having obtained the Satyalingam Charities Scholarship, started for America leaving his wife behind to play her destined part in the great struggle for Swaraj. Young Annapurna had to make her own arrangements for money. She bravely fought for over a year, and when help was actually coming, heard the call of Gandhi and resolved to lay her life at the feet of the Mother. She threw herself heart and soul into the freedom struggle. She burnt all the costly saris, worth 1200 rupees, purchased for her American journey. She found from experience that some definite step should be taken to gather together the scattered energies of the nation into an institution, where lasting and silent work could be done, undisturbed by fleeting political enthusiasms. At great risk to her health, she toured the important places in Andhra Desa for money, and founded the Mohandas Khaddar Parisramalayam at Ellore. In 1923, when her husband returned from America, she met him as he got down from the steamer at Bombay, and implored him to throw his foreign dress into the sea and put on the coarse homespun she had brought for him. It is no wonder he obeyed willingly. She toured like a meteor from place to place, holding up with her persuasive eloquence the great ideal of Swaraj before vast crowds. She always dressed in her quaint Khaddar sari while she came either to deliberate in a committee or speak at a public meeting. Owing to her great loyalty to Mahatma Gandhi, she followed the Health Guide to the very letter. Like her Master, she was always kind and courteous to her opponents and respected their convictions. She never betrayed herself into the narrow bigotry of the new enthusiast, but always held firmly to her convictions.

Towards the end of 1924, she again fell ill and travelled restlessly from one health-resort to another, always accompanied by her devoted husband who, true to the advice of Gandhi, was her best nurse all through this period. During these travels, she found time to finish a beautiful translation of Sri Ramakrishna’s Teachings from Bengali and write an original prose work, Nari, dealing with the destiny of woman in future India. But her health deteriorated, but she managed through sheer power of will to live on till November 9th 1927, when she passed away, just 27 years old, mourned by a tender husband, disconsolate parents, and a whole nation whom she loved and served so well. In spite of painful bedsores, she refused to forsake Khaddar and was finally cremated with Khaddar on. Annapurna was one of those rare souls who have sacrificed their most cherished personal ambitions in life for the service of the Motherland. Her letters to her husband while he was away in America, are a priceless possession for the Andhras, which exhibit the yearnings of a great spirit. Her death has taken away from us not merely an honest and energetic political worker, but a creative artist whose powers were in the process of unfoldment. The esteem in which Mahatma Gandhi held Annapurna Devi will be evident from his letter to her husband written on hearing the news of Annapurna’s death. The letter is still preserved.