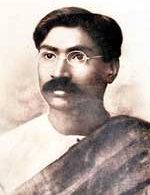 Sri Bhāgya Reddy Varma pioneered social reform and uplift of so-called panchamas, education of women, education in Telugu and religious reform in Hyderabad and the country between 1906 and 1935.

Born on May 22, 1888 to Sri Mādari Venkaiah and Smt. Rangamāmba, he was to have been named Bhāgyaiah. However, when their family guru saw the boy, he predicted that he would be of great service to the community and insisted that he should be named Bhāgya Reddy. Their family belonged to the Mala caste, considered as panchamas. Although he had no formal schooling, he was assisted by Barrister Dos Santos and Ravichettu Ranga Rao, a jagirdar, in his studies.

Worried over the apathy and degradation in his community, he started the Jagan Mitra Mandali in 1906 reaching out to people through lectures, Harikatha, Kalakshepam and literature largely written by him. This organisation developed into the MānyaSangham in 1911, later renamed as the Adi Hindu Social Service League (AHSSL). It worked to promote education, discourage child marriage, abolish the jogin system and promote temperance in his community. It was largely owing to Bhāgya Reddy’s efforts that the jogin system was abolished.

Beginning from 1910, Telugu medium schools were started by him in the bastis inhabited largely by panchamasin Isamia Bazar, Boggulkunta etc. Over time, their number grew to twenty-one with an overall strength of two thousand five hundred students. Many were dedicated to teaching girls, since Bhāgya Reddy felt that the education of girls was the key to the upliftment of the community.

Mahatma Gandhi visited the schools in 1929 and advised Bhāgya Reddy to teach Hindi language also in them. Owing to ill-health, he was forced to turn over the school managements to the Nizam in 1931, but did so with the condition that Telugu medium education would continue in them. Till 1948, these Telugu medium schools were run by Nizam’s government.

Sri Bhāgya Reddy campaigned to promote vegeterianism among harijans and worked against addiction to drinks. He was the organising secretary of the Jeeva Raksha Gyan PracharakMandali founded by Dewan Bahadur S.R. Malani with Seth Lalji Meghji as secretary. He established Bhajan Mandirs in different localities to discourage the liquor habit with the help of Youth League started for the purpose. Adopting novel methods, the youth organised by him, resorted to begging among labourers for the amount that they would otherwise have spent upon liquor. The money so received was saved and later returned to the donating labourers in the form of gold. Women’s support too was enlisted. Over time, the drinking habit declined in the community.

During this period, Sri Bhāgya Reddy Varma was closely associated with the Arya Samaj and opposed attempts to convert Hindus to Islam. In 1913, the Arya Samaj at its annual function honoured MādariBhāgya Reddy with the title of “Varma” in recognition of his service to Hindu society. At a special public meeting of caste Hindus and Adi Hindus, Dharma Veer Vāman Naik conferred upon him the title “Śivaśresty”.

Bhāgya Reddy was the only harijan leader to figure in ‘Pictorial Hyderabad’, a book dedicated to the leading figures and aristrocrats of Nizam’s Hyderabad. Its author, Krishnaswami Mudiraj wrote that

“When the history of Hindus and Hinduism comes to be written, the name of Mr. Bhāgya Reddy will stand out in great relief for promotion of the interests of the downtrodden community.”

Sri Bhāgya ReddyVarma was a great orator. Between 1906 and 1931 he delivered 3,348 speeches. Although he was alloted only ten minutes to speak at the All India Hindu Reform Conference in 1917, he so impressed the audience with his oratory that he spoke for half an hour. Mahatma Gandhi who spoke after him, recalled his speech.

Jagadguru Shankaracharya (Dr.Kurtakoti) so appreciated his eloquence and the boldness of his views that he had him brought to the dais and seated him between himself and Raja Dhanrajgirji. Indeed, he even agreed to inaugurate the Adi Hindu Bhavan at Chaderghat in 1925, but had to cancel his visit due to the bitter resistance of conservative Hindus who formed a human carpet on the road to prevent him from going to the inauguration. Kavyakantha Ganapati Muni was known to him and visited and addressed a gathering at Chaderghat.

Over time, Bhāgya Reddy Varma sensed a continuing caste prejudice in the Arya Samaj and moved away to the Brahmo Samaj. He was introduced to its founder Sri Wallinker by Smt. Sarojini Naidu. Bhāgya Reddyin turn introduced several harijan families to the Samaj. He was increasingly associated with the Deccan Humanitarian League and started observing Buddha Jayanti since 1913. He believed and taught that all men were equal before God, and kept this consciousness alive through personal talks and public meetings.

In 1917, Sri Bhāgya Reddy presided over the first Andhra Desa Panchama conference held in Bezawada. The conference urged the government and society to permit Adi-Andhras the use of public wells, schools and choultries in equal dignity, sought allotment of banjarland, better political representation and schooling for them. Touring Andhra region extensively, Bhāgya Reddy organised conferences in various districts. Both Madras government and Nizam’s Hyderabad began to enumerate the harijans as Adi-Andhras and Adi-Hindus. In 1921, he was honoured with the title “Sanghamanya” at the Adi-Andhra conference in Eluru.

The first three-day All India Adi Hindu Social Conference was organised by him at Prem Theatre in Hyderabad in 1922. He attended the all India conferences of the community at Delhi, Allahabad, Lucknow and Nagpur as the representative from Hyderabad and Andhra. He was elected as President of the All India Depressed Classes Conference held in Lucknow in 1931 in which Dr. B.R. Ambedkar was chosen as the sole representative of depressed classes for the Round Table Conference to be held in London.

In order to eliminate pernicious litigation and foster a community spirit, Sri Bhāgya Reddy systematized the panchayat system with Mohalla Panchayats. The moral support of Kotwal Raja Bahadur Venkatrama Reddy greatly helped this venture in handling disputes amicably and abolishing evil customs in the community. Unfortunately, the system was disrupted by jealousy and petty considerations.

In 1912, Sri Bhāgya Reddy organised the Swasti Dal to promote health among weaker sections. It rendered yeomen service when epidemics broke out. During the outbreak of plague in 1925, its volunteers worked round the clock serving the sick and disposing off dead bodies.

Sri Bhāgya Reddy Varma was also an artist. He once visited Tagore and showed him his paintings. In 1925, he organised exhibitions of handicrafts, paintings, sketches, sculptures and other artistic novelties by members of the community. A prominent Hindu Guru visited the exhibition, appreciated the workmanship and distributed prices and certificates to the winners.

Bhāgya Reddy started a Telugu fortnightly “BhāgyanagarPatrika” devoted to the uplift of untouchables. Also, with the help of Jakkula S. Muttiah, he started an English monthly in 1918 “The Panchama” from Hyderabad. At the time, literacy among harijans was abyssymally low. The papers were started in order to enlist the support of the broader Hindu community.

Owing to his relentless efforts, a large number of prominent Hindus and Hindu reformers supported his work for the community. He enlisted their aid to construct a hall for the community at Chaderghat. Even in the Adi Hindu Social Service League founded by him, he reserved the president-ship and one third of the membership for savarṇas.

Sri Bhāgya Reddy Varma was diagnosed with a tumor in 1930s. Afflicted with cancer, he breathed his last at the age of fifty-one on the Śivarātri day, on 18th February 1939.