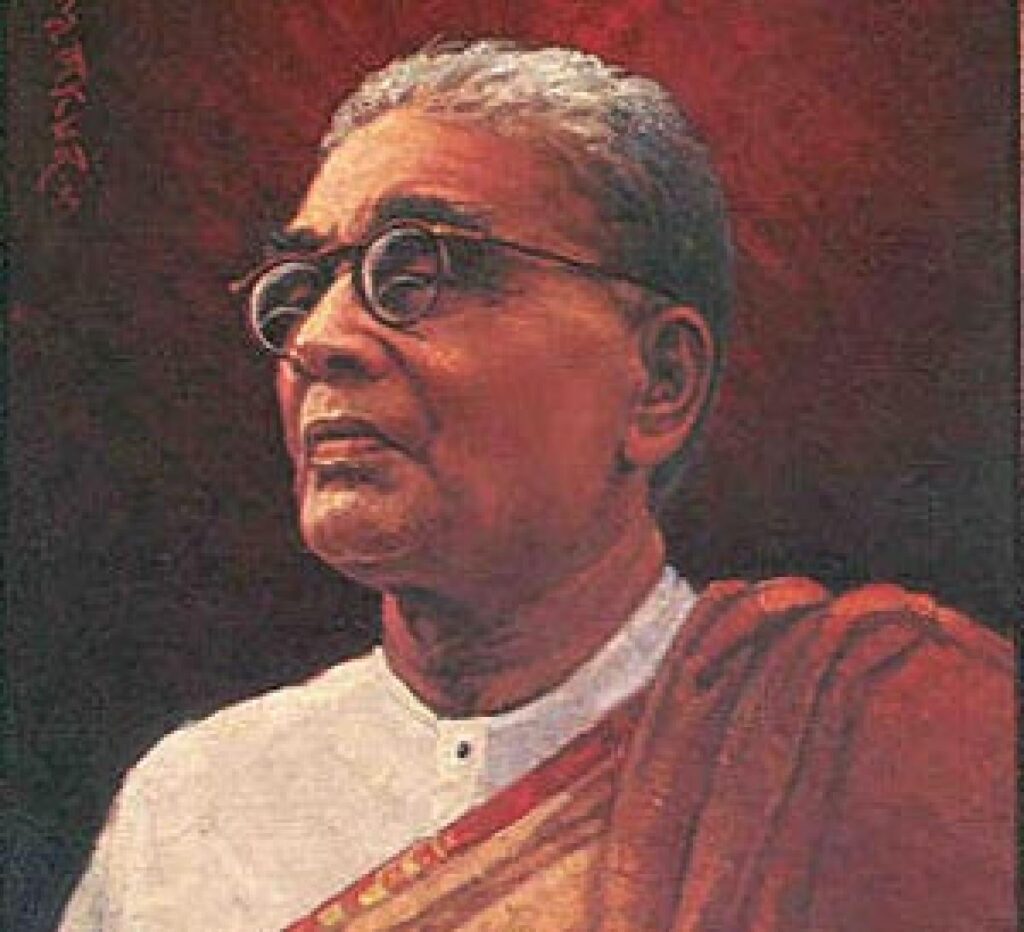 It was the time, when India was rocked by protests against the Simon Comission. Slogans of  “Simon Go Back” rent the air, and black flags were shown wherever the commission members entered. With Mumbai being the epicenter of the protests, the British Government banned any strikes, demonstrations all over the country.  Considering the rather explosive situation, the Government banned all protests, rallies in Chennai. However a large crowd, gathered at Parry’s Corner, opposite the Madras High Court, and began to chant slogans of “Simon Go Back”. The police fired on the crowd, to disperse them. A youngster named Parthasarathi, fell a victim to the firing, and his lifeless body was lying on the square. The police warned that that anyone trying to carry the corpse, would also be similarly shot dead.

When the crowd was scared, one man stopped in with an imposing physique, sharp eyes, to take the body. As the police turned their guns towards him, he tore open his shirt in fury, bared his chest to them. And in a loud voice, roared , “Shoot you cowards, if you have any guts”, his chest bared to the police guns. The police taken aback by the defiance, and understanding the situation, gave way to him. That act of courage and defiance earned  that man, the appellation of “Andhra Kesari”( The Lion of Andhra).

That man was Tanguturi Prakasam Pantulu, one of the great freedom fighters from Andhra Pradesh, and also the first Chief Minister of the newly created Andhra State.

The man who openly defied the British to fire at his bare chest, was born in a small village, Vinodarayanipalem, in the Prakasam district of  Andhra Pradesh,to a pious Niyogi Brahmin couple, Subamma and Gopala Krishnayya on August 23, 1872.  His father was a Karanam of the village, and since his ancestors hailed from Tanguturu, a small town in Prakasam district, that became their surname. His father however passed away when Prakasam was just 11, leaving the family burden on his mother’s shoulders.  His mother left for Ongole, where she ran a small boarding and lodging home, to support her family. In those days people who did such work were often looked down upon by society. With a rather meager income from the boarding and lodging home, he had to work in homes of richer people, stay there to fund his studies.  With a rather fair complexion, a good physique he   would regularly take part in theater, often playing both male and female characters. He loved games and was quite good at cricket too.

However due to his interest in dramas and sports, Prakasam’s education suffered, and he got through his matriculation with great difficulty. It was his Mission School teacher Immaneni Hanumantha Rao Naidu who enrolled him in Pre Matric, and sponsored his education. When Hanumantha Rao, left for Rajahmundry, he also took Prakasam with him, as that city then was a well-known educational center. He enrolled Prakasam in an Arts course, and later sent him to Chennai to study Law.  Prakasam married his sister’s daughter, Hanumayyamma, and later took up a successful law practice in Rajahmundry. A successful lawyer, Prakasam, became the chairman of Rajahmundry Muncipality, at the age fo 35.

However since he was still a second grade pleader, Prakasam could not practice in the higher courts. In those days only barristers could plead in the higher courts, and one of them, suggested him to become one. Motivated by the advice, Prakasam left for London in 1904, and took a vow from his mother that he would not touch meat, liquor or tobacco. With his dedication and hard work, he became a Barrister and later actively campaigned for Dadabhai Nauroji’s election to the British Parliament. It was during this time, that nationalist feelings, social consciousness took root in Prakasam.

As a barrister in London

After graduating in Law, Prakasam returned to India in 1907 and began his practice in the Madras High Court. In a court where most of the leading barristers were either Englishmen or Tamilians,  Prakasam became the first Telugu person to gain fame as a barrister.  He would handle both civil as well as criminal cases. One of the most prominent cases he took up was that of the assasination of Ashe, the British collector of Tirunelveli district by the revolutionary Vanchinathan. The murder happened when Bipin Chandra Pal was touring the South, and raising the nationalist consciousness with his fiery speeches. With his formidable debating skills, Prakasam ensured that  Vanchinathan got away with a lesser sentence. He also edited the Law Times, a magazine for lawyers then. When the British Govt prohibited, people from attending what they felt were the seditious speeches of Bipin Chandra Pal, he once again defied them, by boldly going to his speeches. After the Lucknow Agreement, Prakasam became a regular at most Congress meetings and signed the declaration for Satyagraha in 1921.  He left his profession, and all the money he earned as a lawyer, he used it for the sake of the nation.

Leaving the lucrative law profession, Prakasam, became the editor of the Swarajya Magazine, in Telugu, English as well as in Tamil. He also started a national school, as well as a Khadi production center. He was elected as the General Secretary of Congress party in the 1921 Ahmedabad Session. He was pretty much a hands on leader, being one of the first to visit the spot of any unrest or riot. He visited Multan when Hindu-Muslim riots broke out there, as well as Punjab during the Akali Satyagraha. When outsiders were not allowed into Kerala during the Moplah revolt, Prakasam was one of the few who defied orders and visited it. As a consequence his entire property in Ooty was attached by the British Government. During the 1922 Non Cooperation movement he led a protest in Guntur with 30,000 volunteers and he entered the Central Legislative Assembly in 1926 on a Congress ticket. It was during this time, that Prakasam came in touch with other nationalist leaders like Madan Mohan Malaviya, Vittalbhai Patel.

In the meantime Swarajya, began to become popular among the people especially the Tamil and Telugu editions. That incident at Parry’s Square had made Prakasam somewhat of an icon among ordinary people, especially his open defiance.  However Swarajya had to shut down later on, when the Government increased the deposit money, making it financially inviable for him. In 1937, the Congress party swept the elections in the Madras Presidency and Prakasam had played a major role in the victory. Though he was the first choice for the post of Chief Minister, Prakasam had to make way for Rajaji who returned to active politics. Fact is  Prakasam was the one who led the campaign, while Rajaji was bought out of self-imposed retirement, yet he choose to heed the wishes of the Congress Working Committee.  Prakasam took up the post of Revenue Minister in Rajaji’s cabinet. One of his most important act as Revenue Minister was founding of the Zamindari enquiry committee that looked into the distortions in agriculture then due to the Zamindari system. With the outbreak of World War II, the Congress ministers resigned against not being consulted on Indian participation in the War. Prakasam was one of the prominent leaders down South, who led the Satyagraha against the British war preparations in 1941.

In 1942 Prakasam was arrested for 3 years for taking part in the Quit India movement, and on his release in 1945 toured all over the South to bring Congress closer to the people. The Congress once again came to power in the Madras Presidency in 1946, and Prakasam was sworn in as the Chief Minister. He was supported by Kamaraj, both of whom were against Rajaji, who was the choice of Gandhi and Nehru then. However Prakasam’s tenure lasted for just 11 months, with many lobbies in the Congress working against him.  The feeling was that Prakasam was not accommodating enough to the various interest groups in Congress. And finally Mahatma Gandhi ordered Prakasam to resign, faulting him for using party funds.

After Independence, Prakasam once again plunged into social activities, and toured Hyderabad State under the Nizam, inspite of Nehru’s warnings. He met Qasim Rizvi the leader of the dreaded Razakar’s and warned him that he was pushing his luck too hard. In 1952 he founded the Praja Party and ensured that all the Congress ministers ended up losing the elections, such was the man’s popularity and charisma. Around the same time Potti Sreeramulu started the movement for a separate Andhra State. Sreeramulu passed away after a hunger strike unto death in demand of a separate Telugu speaking state. The protest took a serious turn, there were riots all over Coastal Andhra and finally Nehru had to conceded the demand. When the Andhra State was formed in 1953, Prakasam became the first Chief Minister. It was during his tenure that the Sri Venkateshwara University in Tirupati was set up as well as the barrage on the Krishna River at Vijayawada that now bears his name. However with the Communists opposing his leadership and the Socialist faction withdrawing support, he had to resign as Chief Minister after 14 months.

By the time mid term elections were held in 1955, Prakasam had retired from active politics. And when Andhra Pradesh, was formed in 1956 with the merger of Andhra, Rayalaseema regions with Telangana, it was his counterpart Neelam Sanjeeva Reddy who became the Chief Minister. Though he retired from active politics, Prakasam still toured the state. And on May 20,1957 he passed away in Hyderabad, after suffering a sun stroke.  The Andhra Kesari was no more, the voice that roared in defiance of the British fell silent. However his legacy continues to live, when the Ongole district was renamed after him in 1957, and formed with Talukas from Guntur, Nellore and Kurnool district. A fitting tribute to a towering personality, who dominated the political and modern day history of Andhra Pradesh.