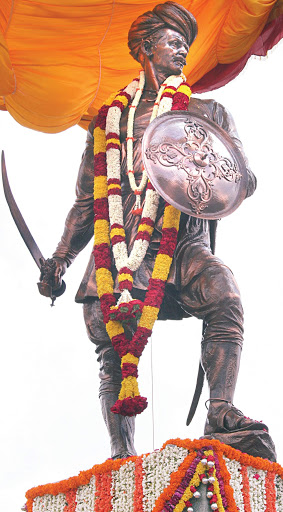 Kittur is one of the small towns located in the district of Belgavi, in Northern Karnataka. The town would however earn a place in Indian history for the resistance against the East India Company by Rani Chenamma in 1824 when the British threatened to annex her kingdom over the Doctrine of Lapse.

Chenamma was born in the village of Kakati, to a Lingayat family and was married to Raja Mallasarja, the ruler of Kittur when she was 14. With the passing away of her husband in 1824, followed by her son,she was left in a state of grave crisis. Apart from her personal loss, she also had to contend with the Doctrine of Lapse introduced by Lord Dalhousie, in which the British could annex a kingdom if it had no male heir. She adopted Shivalingappa as heir to the throne, which however was not accepted by the British collector of Dharwad, St John Thackeray, who called it a fraud. Chenamma sent a letter to Mountstuart Elphinstone, Lt Governor of the Bombay Presidency, pleading her cause. But with the British rejecting the request, war broke out, as Kittur was attacked with a force of 20,797 men and 437 guns of Madras Native Horse Artillery.

The British lost heavily the first time, Thackeray was killed. Chenamma’s trusted lieutnant Amatur Balappa, was the one who led the charge. Two British officers Sir Walter Elliot and Mr. Stevenson were also taken as hostages, whom the Rani released later. The British once again led another assault on Kittur, in which the nephew of Thomas Munro was killed.Chenamma put up a valiant fight against the British till the end, before she was captured in 1829 and passed away in prison.

However one man, did not give up the struggle against the British, her valiant and faithful army chief, Sangoli Rayanna.

Rayanna was born on August 15, 1798 in the village of Sangoli( Belgavi dt), which explains his name too, to Bharamappa and Kanchamma. He belonged to an illustrious lineage of warriors hailing from the Kuruba community, who had fought in many a campaign. His grandfather Rahgappa Veerappa Desai, was known for his bravery and earned the title of “Sāvira oṇṭe Saradāra”. His father himself was a warrior of note,and had killed the tyrannical British officer Hook, who was harassing the residents.

When Kittur fell to the British and Rani Chennamma was imprisoned, Rayanna, decided to continue the struggle. He escaped along with the Rani’s adopted son Shivalingappa,whom he sought to make the next ruler of Kittur. proved to be a thorn in the flesh for British, harassing them with constant raids and attacks in and around Kittur. The British retaliated by imposing heavy taxes on the areas that Rayanna controlled.

He mobilized the local residents against the British and waged a guerilla war. With a well trained army under his command, he attacked the British, as well as the corrupt Zamindars most of whom were collaborating with them. Along with his close aide Gajaveera, began to organize constant raids on British officials in the region. He was also one of the early revolutionaries who made use of guerilla tactics, much like Kerala Varma Pazhassi Raja and later Vasudev Balwant Phadke. He not just built up an army, but also began to recruit the local peasants in his army, and made good use of their knowledge of the area. He would often vandalize British offices, and loot the money, and soon he became a constant terror to them.

Unable to capture him directly, the British used treachery, this time through Rayanna’s uncle Lakshmanraya. The man who harassed the British for a long time, was finally caught by betrayal and treachery of his own. Imprisoned along with Shivalingappa, Sangoli Rayanna, was hanged on January 26th, 1831 at Nandagad, from this banyan tree which is now a memorial.

I may die now but I will soon take birth again and come back to fight for my kingdom and the people until it is free from the clutches of British.

Article also available at History Under Your Feet)