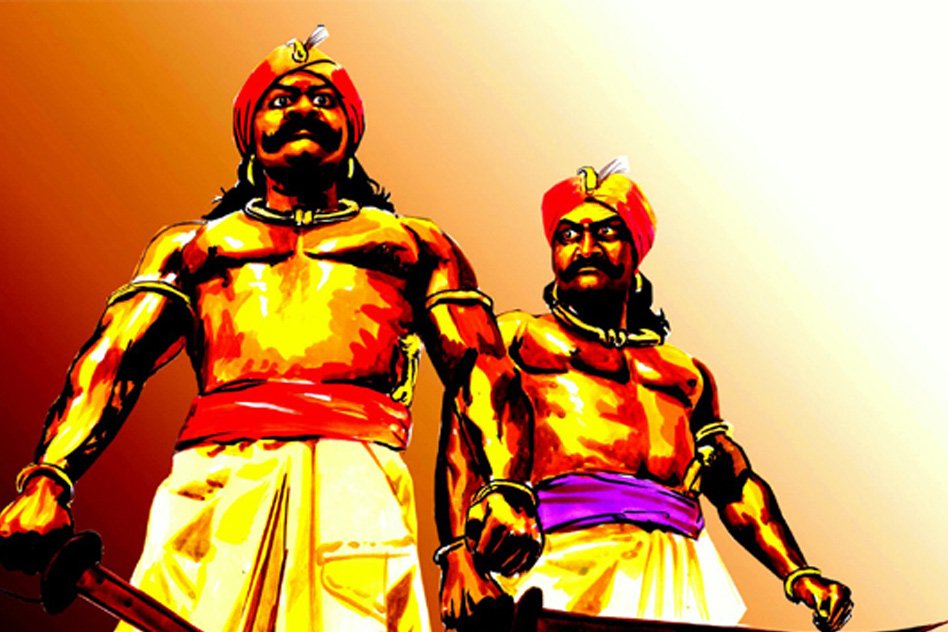 The Marudhu Pandiyar brothers (Periya Marudhu and Chinna Marudhu) ruled Sivagangai, Tamil Nadu towards the end of the 18th century. The Marudhu brothers were the first to issue a proclamation of independence from the colonial British rule from Trichy Thiruvarangam Temple, Tamil Nadu on 10th of June 1801, more than 56 years before what is generally said to be the First War of Indian Independence which broke out in the year 1857.

Periya Marudhu and Chinna Marudhu were born in the year 1748 and 1753 respectively in Narikkudi, a small hamlet near Ramnad. The Marudhu brothers were trained in native martial arts at Surankottai which traditionally served as a training centre for the Ramnad state army. The Valari boomerang is a peculiar weapon unique to India used originally by the indigenous people (ancient Tamils) of the South Asia. It is said that Marudhu brothers were great experts in the art of throwing the Valari stick and using it as a weapon. It is said that Marudhu brothers successfully used Valari in their Poligar Wars against the British colonial forces. They contested in and won many competitions of martial arts and distinguished themselves as brave warriors. They were also great administrators, the power of administering being given to them by Rani Velu Nachiyar.

They were in close association with Veera Pandiya Kattabomman of Panchalankurichi. Kattabomman held frequent consultations with the Marudhus. After the execution of Kattabomman in 17 October 1799 at Kayattar, Chinna Marudhu gave asylum to Kattabomman’s brother Oomathurai. But the British took this reason to invade and attacked Sivaganga in 1801 with a powerful army. The Maruthu Pandiyars and their allies were quite successful and captured three districts from the British. The British considered it such a serious threat to their future in India that they rushed additional troops from Britain to put down the Maruthu Pandiyars’ rebellion. These forces surrounded the Maruthu Pandiyars’ army at Kalayar Koil, and the latter scattered. The Maruthu Brothers and their top commanders escaped. They regrouped and fought the British and their allies at Viruppatchi, Dindigul and Cholapuram. While they won the battle at Viruppatchi, they lost the other two battles.

The British army could not arrest the Marudhu Brothers. When they came to know about the love of Marudhu Brothers for the Kalayar Kovil temple tower (Gopuram), they made a public announcement that the Brothers should come out of their hideout and surrender to them as otherwise the tower of the Kalayar Kovil Temple would be blown out. On hearing this announcement the brothers surrendered themselves to the British, knowing fully well that they would be hanged. When they were about to be hanged by the British they informed the military court judge that, as their last desire, their heads should be buried in the vicinity of the temple so that even after death they would be able to see the temple tower ever. The British did the same as desired by the Brothers. Such was their love for that Gopuram. They were the ardent worshippers of presiding deity (Lord Shiva) of the temple and personally built the Gopuram for the temple whose height is equal to the Gopuram of the Madurai Meeenakshi Amman Temple. From the top of the Gopuram of Kalayar Kovil one can see the Gopuram of Meenakshi Amman Temple even though the distance between these two temples is around 66 Kms.