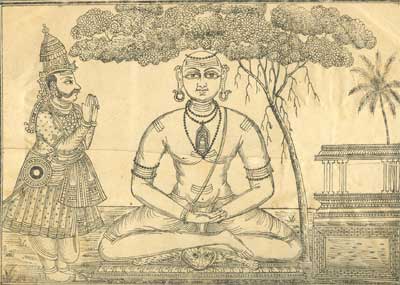 Pusalar Nayanar and the Pallava king

Poosalar Nayanar was born in the town Thiruninravur, in the region called Thondainadu, near Chennai city that had the disciplined people of Vedic knowledge living. He was born in the Vedic chanting tradition of that town. He learnt the Vedas and excelled in its wisdom. Living as a disciplined devotee he kept all the feeling of the mind to the One who enters through emotion and grew a great love for that Three-eyed Lord. Dependency only to the Dark-blue throated and do whatever service required for His devotees was his policy. He served to the needs of the devotees in whatever way possible. He was a worshipping a Shivalinga in the place but was sad that his Lord had to suffer both under Sun and rain as there was no roof above.  A desire began to flame in his mind to build a temple for his Lord.  But he was penniless.  He tried his best to gather the money required from wherever he could but he could not get enough. He was quite disappointed.

Yet, he decided to build a temple in his very heart itself.  His temple had everything that a well planned temple would have.  It had many facilities for the devotees.  It was a temple as if constructed by great kings and the rich. Poosalar did not do it in a single day.  He was not hasty.  He scrupulously planned everything and built it step by step each day as it would necessarily consume some time.  He completed the construction in his mind in some years with such particular accuracy, a temple according to rules should have. It so coincided that the completion of a real Shiva temple constructed by the Pallava king in Kancheepuram and that of Poosalar’s in his mind happened on the same day and time.  Poosalar fixed a day for the consecration of the temple which also coincided with that of the Pallava king.

The whole city of Kancheepuram was in a festive mood.  Lord Shiva appeared in the dream of the king and expressed his congratulations and happiness for building a temple but asked him to postpone his date of consecration as He had to be at the consecration of the temple built by Poosalar that day. The king postponed his date as directed by Lord and started immediately to Tirunindravoor.  He asked the people there about the temple.  They had no answer.  The King met Poosalar and told him what happened.  Poosalar was happy that Lord responded to his prayer and made his temple plan public.  He told the king all about his temple construction and the consecration.  The king understood the difference between temples constructed at a heavy cost by kings and the rich and that built by a devotee in his heart, the cost which could not be estimated in material terms. Lord did appear on the day of consecration of Poosalar temple.  All were happy.  Poosalar reached the Lotus Feet of Lord that day itself.  Lord made him one among the Nayanmars.  To fulfill the desire of Poosalar, the king built a big temple in Tirunindravoor also. A Shivalinga was installed with due consecration ceremony. As Lord was in the heart – Hrudaya of Poosalar, He was named Hrudayaleswarar.

It is noteworthy that distinguished Shiva devotee Poosalar Nayanar instrumental for the emergence of the temple has his place in the sanctum sactorum with Lord Shiva. As Poosalar ever kept Lord Shiva in his heart and worshipped Him and built an imaginary temple, many suffering from heart problems pray to Lord here for cure. Noted Cardiologists in Chennai, Kancheepuram and Tiruvallur visit this temple praying to Lord to save their patients.