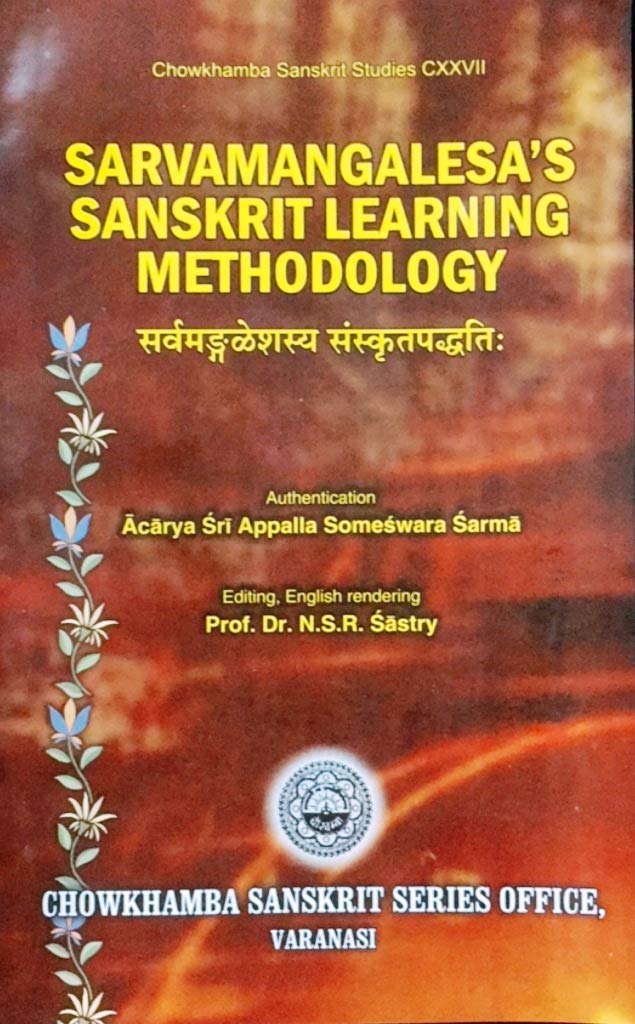 His ambition is to enlighten the common man on Sanatana Dharma and its significance. He trained hundreds of persons in chanting the Gita and they in turn trained lakhs of people. Even in his old age, he was never tired of guiding anyone who approached him for learning Sanskrit, Telugu or on spiritual matters.

The name of Appalla Someswara Sarma, was well-known in literary and spiritual circles. He taught Vyakarana, Alankara and Advaita Vedanta for over four decades in various institutions, including Andhra University. The Tirupati Kavita Samithi honoured him with the title `Vyakaranalankara Chakravarti’ and Bharati Theerta (Vizianagaram) gave him the title `Sahitya Visharada’.

Reminiscing his days as a student and later as a teacher, he had said, “In those days salary was not the main criterion for teachers. My first salary was only Rs.15. We were more interested in making the students learn the subject than monetary gains. The system of learning was traditional and the students had great respect for their teachers.”

He expressed satisfaction at the introduction of modern methods in the teaching of Sanskrit. The establishment of Sanskrit universities, Kendriya Sanskrit Vidyapeeths, the Sanskrit Research Institute, the Vedic Research Institute and the Centres of Advanced Learning in Sanskrit in different states had contributed to the promotion of Sanskrit learning and studies.

“While Kerala tops the country in the learning of Sanskrit, our State (Andhra Pradesh) is lagging behind,” he lamented and suggested that the Government introduce it as a subject at all high schools and colleges and sanction Sanskrit lecturer posts in all colleges for its promotion. “Sanskrit has an ocean of knowledge and it has helped in the integration of the country.”

Born in Sarvasiddhi Rayavaram village of Yelamanchili mandal in Visakhapatnam district on November 10, 1920, Someswara Sarma, had his education at the Vizianagaram Sanskrit College. It was his paternal uncle, Joganna Sastry, who had kindled the interest of learning Sanskrit in the traditional way.

Someswara Sarma is a contemporary of Sriman Sribashyam Appalacharyulu. They were both students of the M.R. Sanskrit College in Vizianagaram. Sarma began his career as a Sanskrit teacher at the Sanskrit College attached to the Padmanabham temple.

Someswara Sarma has the unique distinction of teaching both the father and son. He taught Peri Sarveswara Sarma at Simhachalam during the latter’s boyhood. He also taught his son, Suryanarayana, in M.A. in Andhra University. Similarly, he taught Sanskrit to Ayyagari Somayajulu, when he was a boy, at Simhachalam and later to his son, Sriramachandra Murthy, in M.A.

Someswara Sarma shared the dais with the Prime Minister, Jawaharlal Nehru, when the latter came to the city and commissioned the first ship built by Hindustan Shipyard Limited, `Jala Usha’, in 1948. Vedic scholars were taken to HSL from Simhachalam to conduct puja on the auspicious occasion and being the Head Pundit, Someswara Sarma was given a chair next to the Prime Minister.

He has penned nearly 16 books on various subjects and even at his old age scholars and students approached him for studies and deliberations on various issues. Reading, teaching, delivering lectures and writing books have been his main activities. He was felicitated by the former Vice-President of India, Krishan Kant, and the Union Minister for Human Resources Development, Murali Manohar Joshi, in recognition of his yeomen services in the field of Sanskrit education.

Says his student, M.V. Ramanaiah, who has retired as a deputy director in the Naval Science and Technological Laboratory, “The present Sanskrit teachers of AU and the Sanskrit University, Tirupati, are all his students. Even university professors come to him for advice. He is an authority in Sanskrit and Telugu languages and the authors of literary works in these languages show their works to him for comments before they are sent for publication.”

He has also acted on stage and won laurels from the audience and from experts in the field. He played the role of Maricha in the drama `Abhignana Sakuntalam’ in Sanskrit at the Tirupati Sanskrit College in 1951. He not only donned the roles of Timmarusu and as Ananda Gajapati in the playlets, staged at the Vizianagaram Maharaja’s College between 1958-60, but also composed and directed them. He continued acting on stage after joining the Andhra University faculty.

He was adviser to the Gita Prachara Samtihi in Old Town for more than three decades and attended all the spiritual functions. He oversaw the construction of the Gita Bhavanam, says his close follower, Naredla Sambasiva Rao.

Looking back with contentment, Someswara Sarma had said, “I cherish my experiences at Tirupati and at Andhra University the most. In Tirupati, it was Sanskrit… Sanskrit…Sanskrit, all the time. The students conversed in Sanskrit, apart from reading and writing in the language. On the contrary, in AU it was a combination of tradition and modernity. This was a unique experience for me as it gave me exposure to both traditional and modern methods of teaching in Sanskrit.”

A renowned grammarian, Dr. Sarma was author of several works like Vedabhumi, Vivekachudamani Sarah, Kaumudi Saradagamam, and Prasthanatrayam. He was also recipient of several titles which include ‘Sarvagnasekhara’, and ‘Vidya Vachaspati’. Rashtriya Sanskrit Vidyapeetham of Tirupati honoured him with ‘Vachaspati’, its honorary D.Litt. He also received Telugu University award.

He left his mortal coil at the ripe age in January 2010.