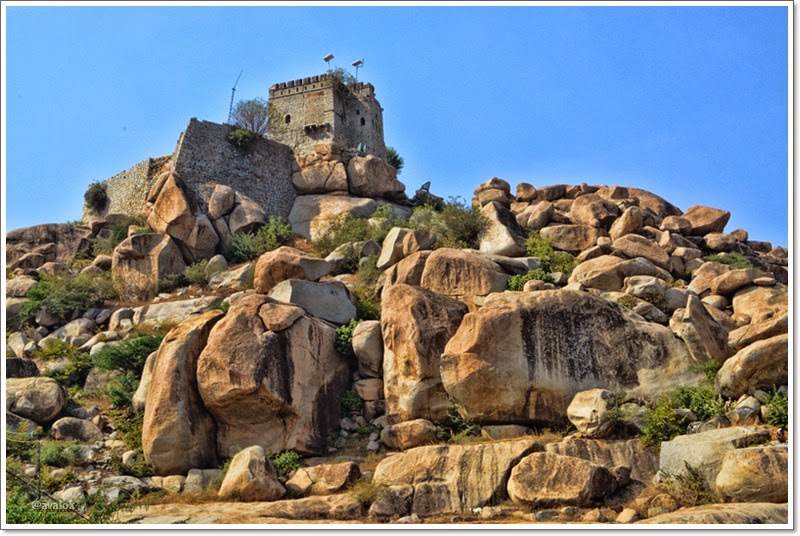 One of the main aspects of the Vijayanagara Empire history, was the regular conflicts with the Bahmani rulers, primarily over the Raichur-Tungabhadra Doab region.  It  was a conflict, that often kept going back and forth, with the Vijayanagara rulers winning at times, and Bahmani Sultans the other times. The frequent conflicts with the Bahmani Sultans, had not just devastated large parts of the Doab area, but also resulted in wholesale massacres and destruction of temples too. Even though the Bahmani empire had split up now into Bijapur, Golkonda, Bidar, Berar and Ahmednagar, the annual raid and loot tactics by the Bahmanis continued.  The first thing Sri Krishnadeva Raya, did on ascending the throne was to put a stop to the regular loot and raid, affairs by the Bahmanis. The raiding Bahmani army of Bijapur was decisively routed at the Battle of Diwani and Krishna Deva Raya, went in hot pursuit of the Bahmani Sultan,Yusuf Adil Shah.  The retreating Bijapur sultan, Yusuf Adil Shah, was defeated and killed at Kovilkonda, it  was a crushing blow for the Bijapur forces.  After Bijapur fell, Sri Krishna Deva Raya turned his attention to the other Bahmani kingdoms. His next target was Gulbarga, where the Bahmani Sultan, Mahmud Shah, was overthrown and imprisoned by his minister Qasim Barid. Krishnadeva Raya, defeated Barid, freed Mahmud Shah, restored the throne to him, and proceeded to capture Bidar too.

The other main rivalry Krishnadeva Raya had was with the Golkonda sultan, Quli Qutub Shah, the founder of the Qutub Shahi dynasty, and his contemporary. While Sri Krishnadeva Raya was engaged in his campaigns against the Gajapatis, Quli Qutub Shah, occupied the forts of Warangal, Khammam,  Rajahmundry, and conquered most of Coastal Andhra, right up to Machilipatnam. However Sri Krishna Deva Raya’s able Prime minister, Timmarasu, managed to defeat Quli Qutub Shah, and regain most of the territories. By 1512,  Sri Krishna Deva Raya controlled most of the territories to the North of Karnataka, and the Bahmani sultans, annual raid and plunder also came to an end, with the crushing defeats inflicted on them.

The constant battles between Vijayanagara and Bijapur continued, resulting in the defeat of the Sultan, Ismail Adil Shah.  However, Sri Krishna Deva Raya, wanted to put an end to this constant feud once for all, and turned his attention to the strategic fort of Raichur, located in the Tungabhadra- Krishna Doab region.  The fort of Raichur was built around 1284 CE by a Kakatiya ruler Rudra, and  later it became a constant source of dispute between the Bahmanis and Vijayanagara rulers. For over  2 centuries, the Bahmanis and Vijayanagara rulers, fought bloody battles over Raichur fort, and possession kept passing from one to another. What Krishna Deva Raya, sought was a crushing victory, by which the Bahmani Sultans would never again attack, Vijayanagara and the constant feuds would come to an end. His objectives were to gain control over Raichur, and completely defeat Ismail Adil Shah, the Bahmani Sultan.

The scale of the mission was mind boggling, 50,000 scouts were deployed ahead of the army, and their job was to act as spies and keep sending regular information. 2000 horsemen armed with bows, made up a force of around 736,00 with 32,600 horses and 55o elephants. 30,000 infantry were led by Pemmasani Ramalinga Nayaka, the commander of the forces, followed by around 14 contingents of fully armed soldiers, with horses and elephants.  The archers and musketeers had quilted tunics, shieldmen with swords, and elephants with knives fastened to their tusks. 20,000 washer-men accompanied the army along with courtesans, as well as 12,000 men with leather water bags to supply water. It was one of the largest forces ever assembled, and the din of the drums, trumpets, shook the earth. The commander  Ramalinga Nayaka, hailed from the illustrious Pemmasani Nayakas clan, that ruled over Gandikota, and which served the Vijayanagara empire faithfully. Ramalinga Nayaka, had earlier fought with distinction in the battles against Golkonda, Bijapur, and he was Sri Krishnadeva Raya’s favorite commander, given the charge of this mission.

On reaching near to Raichur, Sri Krishnadeva Raya, set up camp, and waited for the news of Ibrahim Adil Shah’s arrival, after sometime he received the news of his arrival, with a 140,000 strong army on the banks of the Krishna river.  The Bijapur army camped on the opposite banks of the river, straight opposite the Vijayanagara army, and the stage was all set for the battle.  As per many accounts on May 19, 1520, the battle began, with the sound of trumpets, drums and the war cries,  drowning out all voices, and creating a massive din.  The initial advance was made by Krishna Deva Raya, and and the furious assault,drove the Bahmani soldiers back to their trenches. However the Bijapur forces countered back, with cannon fire, that caused great loss in the Vijayanagara forces making them fall back into a retreat.  Seeing his forces falling back, Sri Krishna Deva Raya, decided to lead from the front, and commanding the second line, rallied the troops, and counter attacked. He ordered all his divisions to mount a straight forward counter attack, and that had the effect, scattering the Bahmani forces, routing them.

So furious was Krishna Deva Raya’s assault, that the Bijapur forces, ran for their lives, were totally scattered,  and he chased them all the way to the river. One of the features of  Sri Krishna Deva Raya’s  military campaigns, was his tendency to lead from the front, often at great danger to his own life. It was the same tactics, he adopted here too at Raichur, and the Bijapur forces suffered one of their worst rout ever.  Crossing the Krishna, river, Sri Krishnadeva Raya now attacked the Sultan’s camp, who by then aided by his faithful bodyguard, Asada Khan, managed to escape. While most of  the Bijapur forces, fled, a small contingent under Salabat Khan, the Sultan’s general remained back, and put up a brave fight till the end. It was however in vain, as the outnumbered contingent, was annihilated by the Vijayanagara forces, and Salabhat Khan himself was taken prisoner. With the Bijapur army routed, taking the fort of  Raichur was now easy, and Krishna Deva Raya, marched in triumphant style towards the fort.  He was also assisted by the Portuguese, led by Christovao de Figueiredo , who with their gunners, helped him to pick off the defenders off the wall easily, and soon Raichur fell. The tactical alliances with the Portuguese had worked here.

It  was a crushing defeat for Ismail Adil Shah,  that he gave up his plans of further conquests, and instead focused on building up alliances with other Bahmani rulers. While the victory at Raichur, was the high point of  Vijayanagara empire, it was also a curse in some ways.  The Vijayanagara rulers became haughty and over confident,  and Sri Krishna Deva Raya’s humiliation  of the Bahmanis after victory, only increased the animosity further. The Bahmanis had realized that only by uniting together as one, would they be able to take on Vijayanagara, and they worked on strengthening the alliances between them. What was undeniable however was under Sri Krishna Deva Raya’s the Bahmanis were given their most decisive defeat everywhere, and for some time, none of the kingdoms even dared to challenge him, such was the fear his name struck.