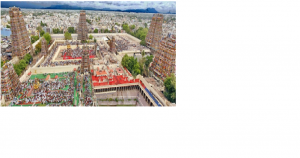 About 634 years ago, in early April 1386 CE, Devi Meenakshi temple in Madurai reclaimed its glory.  Between 1321-1386 CE, many territories of present day Tamilnadu were attacked and were under the occupation of Sultans, with their Head-quarters at Madurai.

Muslim invaders under Delhi Sultan Malik Kafur, raided holy towns of Srirangam, Chidambaram, Madurai and many more. His army butchered thousands and thousands of common people. After plundering Madurai, their eyes fell on Devi Meenakshi temple. Many devotees without any formal training on warfare tried to delay the inevitable, by standing guard against the invaders.  A few devotees hurriedly hid the Vigraha in the meantime. These devotees were no match to the blood-sucking, well trained and sword-wielding Muslim invaders. Soon thousands of devotees were martyred in the attempt to save Meenakshi temple.

Invaders ransacked the temple but they couldn’t find the vigraha.  They looted all its wealth and carried it to Delhi.  Malik Kafur appointed his governor and through him, continued to exploit Hindus who lived there.  In 1386CE, Kumara Kampana of Vijaya Nagara empire waged battle against the Muslim invaders and ended the barbaric rule.  Once the Muslim rule was overthrown, the temple was reopened for worship. This historic event happened in 1386CE.

On the 8th day of Panguni festival in 1323CE, Mohammad Bin Tughlak attacked the sacred Vaishnavite temple of Srirangam, dedicated to Sri Ranganatha Swamy, and massacred around 12000 unarmed men, women and children, devotees who were trying to shield the temple.  After nearly 45 years Kumara Kampana waged a victorious battle, conquered the town and liberated the temple.

Kumara Kampana, of Vijayanagara empire, was the son of king Bukkaraya I and led the successful invasion of the Madurai sultanate. Kumara Kampana’s wife, Queen Gangadevi, described the war and the victory of Vijayanagara empire in her classic epic Sanskrit kavya `Madhura Vijayam’. According to the poetic legend, it was Ganga Devi who gave Kumara Kampana the goddess’ sword to fight and liberate Madurai from the Sultanate, and reopen the Meenakshi temple and “to undertake the righting of vast wrongs”, states William Jackson.

The poetess extraordinaire, Queen Gangadevi, gives us a valuable account of the condition of the period. She laments thus in the classic epic poem, “Madhura Vijayam” (The Victory over Madhura). Numbers in square brackets indicate the verse number below.