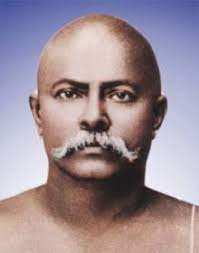 Canchupati Venkata Rao Venkatasami Rao otherwise known to the world, followers and disciples as Master CVV who established ‘Brikta Rahita Rajayogam’ a new yoga and spiritual school of thought and in the beginning days, he was referred as ‘Kumbakonam Swamy’. He was born into Telugu Niyogi Brahman Family in the year 4 th Aug 1868 at
Kumbakonam town on the banks of River Kaveri. It was reported that his ancestors migrated from the present day Prakasam District of Andhra Pradesh. One must keep in mind that substantial people went to the Thanjavur or Kaveri Delta area either in search of green pastures or looking for Royal Patronage for the Arts and Literature. Carnatic doyens Kakrla Thyaga Raja, Shyama Sashtri and Muthu Swamy Deekshitulu ancestors also migrated to the
Kaveri Delta. One of the founders of Dravidian Movement, Dakshina Murthy aka Karunanidhi belonged to this same category. Famous Civil Engineer and architect of Modern Mysore, Mokshagundam Visweswaraiah had roots in Prakasam District. The coming of Master CVV was mentioned in Agastya Naadi and it was read before Master who acknowledged the correctness of contents in Agastya Naadi. Dhanista, May Call and Equinox Day are some
important events followed by his disciples.

Kumbakonam is noted for the presence of large number of Temples and known for ‘Mahamaham’ festival celebration happens once in 12 years which attracts huge crowd from every part of South India. Adi Kumbeswara Sahitha Maha Mantra Pita Mangalambika Temple is very famous and connected to the Saiva Culture of South India. The town has the Brundavanam of Madhwa Saint Sri Vijayendra Tirtha who indirectly was responsible the establishment of Present Day Sri Raghavendra Swamy Mutt @ Mantralayam, AP State.

Similarly, it was the earlier Head Quarters of Present Day ‘Kanchi Mutt’ (according to Mutt History, it was forced to migrate to Kumbakonam due to Muslim rulers viz., Hyder Ali and Tipu Sultan vandalism and unrest created thereafter) and Mutt Head, Maha Periyava Sri Chandrasekhara Saraswathi got coroneted and spent considerable time. Kumbakonam was said to be the place for large number of Vedic Scholars and Patashalas because of
Patronage from Local Rulers. Kumbakonam dates back to the Sangam period and was ruled by the Early Cholas, Pallavas, Mutharaiyar dynasty, Medieval Cholas, Later Cholas, Pandyas, the Vijayanagara Empire, Madurai Nayaks, Thanjavur Nayaks and the Thanjavur Marathas.

Master C. V. V. married Rukmini in 1880 when he was 12 years old and they had three sons and a daughter. His wife Rukmini died in 1904 when he was 36 years. At the age of 38 in 1908 he married Venkamma with whom he had another three daughters and a son. According to Pravathi Kumar “Master CVV, the Master of Aquarian Age, inaugurates new path of Yoga by which he proposes to neutralize Karma and liberates in quicker manner. His
Path Bruktha Rahitha Raja Yoga annuls the accumulated Karmic effect and the Master does this in cooperation with Cosmic Will’ (See: The Aquarian Master by the same author for more details).

Master CVV was fluent in Telugu, Tamil, English and Sanskrit and well versed in Vedas and Musician of a high order. He had worked as the Chairman of Kumbakonam Municipal Corporation for some time. He was attracted to the Theosophy and regular visitor to its office @Adayar, Madras. He met Madame Blavatsky, the founder of Theosophy.
In olden days 64 Yogas are in existence. This is the 65th Yoga. All the information is given in scientific manner. Hence, this yoga is named as New Yoga or Scientific Yoga or Satya Yoga.

The Creator named His Yoga as &quot;Bhrukta Rahita Taraka Rajayoga&quot; i.e. Bhrukta means hidden. Hidden means previous births karmic effects. Rahita means eradication. Taraka means superior. Rajayoga means one should not leave his family life. He may practice the Yoga without discarding the family life, he need not be a sanyasi. To execute this Yoga the Creator selected Canchupati Venkatrao Venkaswami Rao as a fit person and the Creator
dispatched his Yoga rules, regulations, instructions and other things through Mahatmas who are bodily living in Himalayas. Thereafter, Master MTA was the Guru of CVV who was none other than Paramatma himself.He started the Bhruktha Rahita Tharaka Raja Yoga on 30.05.1910 at 8.30. P.M and found one atom was responsible for human creation carrying the effects of Karma (Birth and death Cycle). The American President Bill Clinton’s Scientific Advisor Dr. Krishna gave an interview to Newspaper Ëenadu in 2001. In that, one atom is the cause for human birth. It is giving diseases to the human body. If it is rectified, man will live eternally on this earth without death and rebirth. It is repeated by the American President Bill Clinton also (See: Who is CVV Master? What is his specialty in spirituality? In
https://www.quora.com. Physical eternity is one of the main goals of this Yoga. Master CVV promised immortality to Dr. Annie Besant and however died on 12 th May 1922. Later, Bhagwan Ramana too refused to believe in and criticized it openly.

His Path of Yoga was described by Ekkirala Veda Vyas (Master EV) as ‘Electronic Yoga’ and in fact he wrote a book on it. It works instantaneously when invoked. The regular time for doing this prayer is Morning 6.00 AM and Evening 6.00 PM. One Prayer would remove one birth Karma and hence, it was suggested to hold Prayers continuously without break for a period of 10 years.

During his life period Master CVV cured many people from sufferings of various diseases that were not curable. Master EV brother Ekkirala Krishnamaacharya (Master EK) was said to be the last direct or indirect Medium (He is working as a Master of Synthesis in the work of Master CVV and Master Maitreya). Master CVV called his disciples as Mediums and known to have initiated over 700. Veturi Prabhakara Sashtri (VPS) Garu was one such direct
medium specializing on healing, rectification and health. His autobiography ‘Prajna Prabhakaram’ gives wonderful insights on Master CVV and Rama Kotaiah(Tat Garu), a direct disciple of VPS wrote on his Guru-the Medical Healer (See: 2 Volume set).‘Prabhakara Mitra Mandali’ founded by admirers of VPS conducting Raja Yoga classes
similarly like CVV Centers.

Master CVV was considered to be the Avatar of Synthesis and incarnation of sage Agastya who in the Theosophical Circles known as Master Jupiter said to be residing in Nilagiris or Blue Mountains. He left the Physical Body on 12 th May 1922 as exactly predicted by him.

The meditation proposed by Master CVV:
 To meditate on the state of the absolute being we are ourselves, where there is neither sound, colour, form, idea nor thoughts
 To choose a fixed time for the daily meditation, best at an interval of 12 hours – 6 o’clock in the morning and evening
 To utter 3 or 7 times the “OM” in a soft and uniform manner and listen to the sound
 To visualise the Master and speak the sound key “Namaskarams Master CVV”
 Thereafter to remain silent for 15 minutes and observe what is happening inside: “Dip Deep”
 To observe how the thoughts emerge from us.