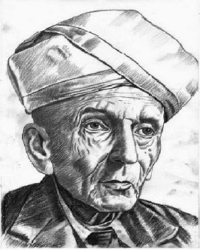 Engineers Day is celebrated in Bharat to commemorate the birthday of Bharat Ratna Sir Mokshagundam Visvesvaraya. A Modern Day Rishi, he was born on September 15, 1860 in Muddenahalli village in the Kolar district of the erstwhile princely state of Mysore. His father Srinivasa Sastry was a Sanskrit scholar and Ayurvedic practitioner. His mother Venkachamma was a religious lady. He lost his father when he was only 15 years old.

Like many of our Rishis of yore, he was combination of philosophy, scientific temperament and high values.

He cleared his B.A. Examination and with assistance from the Maharaja of Mysore joined the Science College in Poona to study Engineering. In 1883 he ranked first in the L.C.E. and the F.C.E. Examinations (equivalent to B.E. Examination of today). Sir M. Visvesvaraya lead a very simple life. He was a strict vegetarian and a teetotaler. He was known for his honesty and integrity.

Work at Hyderabad : During his stint with the Nizam of Hyderabad, he suggested flood relief measures to contain the floods of River Musi.

As Dewan of Mysore : In 1912, Maharaja of Mysore appointed Visvesvaraya as his Dewan. Before accepting the position of Dewan of Mysore, he invited all his relatives for dinner. He told them very clearly that he would accept the prestigious office on the condition that none of them would approach him for favors. As Dewan of Mysore, he worked tirelessly for educational and industrial development of the state. When he was the Dewan many new industries came up. The Sandal Oil Factory, the Soap Factory, the Metals Factory, the Chrome Tanning Factory , were some of them. Of the many factories he started the most important is the Bhadravati Iron and Steel Works.

He was instrumental in the founding of the Government Engineering College at Bangalore in 1917, one of the first engineering institutes in modern day Bharat.

Some of his achievements include :

The first dam in the world to use automatic sluice gates; It has an attached terrace garden popularly known as Brindavan Garden.

His Day of Retirement : The Day he retired, he walked back home without using the official vehicle saying that he no longer is entitled to use it.

His message to the youth of Bharat was to draw deep from our past, believe in our native genius, learn what Modern science has to offer and implement it to the benefit of Bharat.

We offer our pranaams to this great visionary son of Bharat.