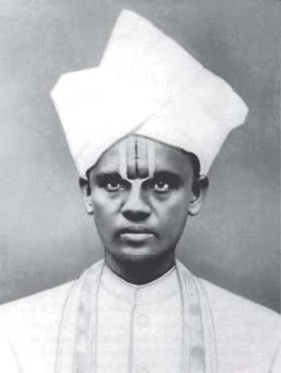 A servant of the divine

The whole world knows of Swami Vivekananda. The heroic saint who rose in Bharat’s darkest hour and ignited the flame that would reclaim for Bharat her rightful place at the head of the comity of nations.

But there is another man whose story is not known. It is not that he desired for such fame or that he might have felt fulfilled by such recognition. It is a story that we must still tell, because it relates to a most important event in the renaissance of the nation. The complete range of twisted  narratives built by colonial European Indology are laid bare by this single story of the indivisible and universal spiritual mission of the Hindu nation.

Alasinga Perumal a devoted servant of Sri Maha Vishnu, belonging to a Vaishnava family of Chikkamagalur, Mysuru, threw himself without reserve into the service of the divine cause. Of humble and limited means, he raised an astronomical sum of four thousands of rupees to allow Swami Vivekananda to make his journey to the United States of America. He stood with the Swami even as Swami Vivekananda struggled initially after his arrival in America.  Alasinga Perumal sold his wife’s jewellery and also incurred a further debt on his own account to provide further assistance to the Swami in America.

Sums that would daunt the wealthiest monarch in the country and would have been unimaginable for a man of such humble origins and limited means. All, before he had even turned thirty. He canvassed tirelessly for assisting Swami’s work before his journey to America and after his triumphant return from the tour.

While Swami Vivekananda was the voice that spoke his guru’s message to the world, Alasinga Perumal was the agent of the guru’s will that provided the wherewithal  for that most important journey that was to ignite the renaissance of the Hindu national spirit.

Alasinga Perumal was born as Mandam Chakravarti Alasinga Perumal in 1865. His father was Chakravarti Narasimhacharya. His family belonged to the Tenkalai  branch of the Vaishnava tradition established by Ramanujacharya. His father had moved to Madras to find employment that would support his family. Alasinga was a brilliant and studious student at the Madras Christian College. He received special mention and support of a scholarship from the college for his study. He wanted to study law, but family finances would not permit it.

He married Rangamma, a girl from a Karnataka Iyengar family. Rangamma was a most self sacrificing lady. Noble to the core and deeply devoted to the mission that her husband had entered. Not once did she obstruct the work that Alasinga had undertook. She gladly gave up the little that she had in the way of worldly possessions. Such is the devotion that built and sustained the Hindus for thousands of years. She passed away at a young age, in 1905.

Alasinga finished studies at Madras and then went to Kumbakonam and Chidambaram. At both towns he worked as a school teacher. In 1889 he returned to Madras. There he taught at Pachaiyappa’s school in George Town. In a few years he became headmaster at the college. A position he held for the rest of his life. He passed away in 1909, at a young age of forty five.

In 1891, Alasinga Perumal learnt of an upcoming Parliament of World’s Religions, to be held in Chicago in 1893. He and his friends were determined that a suitable representative must be found to represent the ancient Hindu legacy. In 1892, Narendranath (having taken the name Bibidishananda), the disciple of Sri Ramakrishna Paramahamsa was speaking in Triplicane Madras. Alasinga heard this great monk speak and knew instantly that he had found the one being who could represent the legacy of the Hindus to the world. He proposed the idea to the Swami. The monk considered the proposition and accepted.

Now it was Alasinga’s life’s mission to secure the means to send the Swami to the Parliament.

Alasinga and his friends campaigned extensively for the funds. He sought support from princes and paupers without distinction. After many months of heartbreaking work, the band gathered a princely sum of rupees five hundred. A large donation promised by the prince of Ramnad was not forthcoming. It was a very respectable sum, for even very generous social work in India, but by no means sufficient to fund travel and living in a leading industrial power of the world.

Alasinga was dispirited and meticulously returned the contributions from the many individuals and groups from where he had gathered the funds. For the moment, the entire plan seemed to have been dissolved.

But soon the Swami was inspired by visions of Sri Ramakrishna instructing him to travel to America. Ma Sarada Devi also had a similar vision and advised the monk to embark on his mission. The Swami visited Hyderabad and was much encouraged by the robust reception that he received. Alasinga went back to work and was soon rewarded by a handsome contribution of Rs. 4000/-

The monk now had his mission set out for him. According to the suggestion of the prince of Khetri, Ajit Singh, the Swami assumed the name of Swami Vivekananda. The name by which he is now immortalized.

On the 31th of May 1893, he embarked on the S.S. Peninsular of the Peninsular and Orient Company. Along his journey he discovered the ancient spiritual links between Bharat and the whole of eastern Asia. Ancient Sanskrit and Pali texts formed the foundations of the cultures all over east Asia. The swami’s Indian origin and his saffron robes instantly gave him admission and reverence in every sacred space in eastern Asia.

After a two month long journey, Swami Vivekananda arrived in Chicago, the location of the Parliament on July 31, 1893. The rupees four thousand purse amounted to little more than two hundred british pounds. He had spent a considerable part of that money and then was spending, about one pound per day just for survival at the most meager subsistence. And he was already running thin on funds. To make things considerably worse, he discovered that the Parliament sessions were scheduled two months later. None in the entire team of enthusiasts, activists, aristocratic supporters or the Swami himself, of unmatched intellectual brilliance, had actually checked the dates of the Parliament sessions or the requirements to enter the parliament.

On 20 August he wrote a letter to Alasinga where he related,

The expense I am bound to run into here is awful. You remember, you gave me £170 in notes and £9 in cash. It has come down to £130 in all!! On an average it costs me £1 every day; a cigar costs eight annas of our money. The Americans are so rich that they spend money like water, and by forced legislation keep up the price of everything so high that no other nation on earth can approach it. Every common coolie earns nine or ten rupees a day and spends as much. All those rosy ideas we had before starting have melted, and I have now to fight against impossibilities. A hundred times I had a mind to go out of the country and come back to India.

After such a struggle, I am not going to give up easily. Only try your best to help me as much as you can; and even if you cannot, I must try to the end. And even if I die of cold or disease or hunger here, you take up the task. Holiness sincerity, and faith. I have left instructions with Cooks to forward any letter or money to me wherever I am. Rome was not built in a day. If you can keep me here for six months at least, I hope everything will come right. In the meantime, I am trying my best to find any plank I can float upon. And if I find out any means to support myself, I shall write to you immediately.

Here was the second time in a matter of months that Alasinga was called upon to provide a large monetary support to the Swami, who was now on the other side of the planet.

Alasinga now borrowed a sum of rupees one thousand from a merchant and also sold his wife’s jewelry to raise more funds. This allowed the Swami to travel to Boston and return later to Chicago. Swami Vivekananda eventually received support locally in America and then became a great celebrity. There is much evidence to suggest that the Swami consciously avoided collecting a large gathering, but the followers that he gathered were the stuff that he had always talked about. With spines and muscles of steel and intellect of thunderbolt.

The press in India initially ignored this spectacular Swami even as he toured America and made a sensation. Alasinga Perumal now organized celebratory public meetings across India to inform the public of the Swami’s astounding success. The most influential opinion leaders and aristocracy of India attended and made glowing references to this shining star of Hindu renaissance. Now the press took note of the Swami and in a short while, the whole country was euphoric. The blithe of a thousand years of brutal foreign dominance had now lifted from the hearts and minds of the nation.

The Swami returned to India to a tumultuous welcome. The despondency of a century and a half of complete subjection to the English was now shattered. The Swami had ignited the hearts and imagination of the nation. The seeds of a resolve for Indian national independence and glory were sown by the Swami in Chicago with a speech so innocuous and harmless as could ever be imagined.

Alasinga Perumal the humble servant of the divine was the man who must be directly credited for supplying the wherewithal for this signal event in the history of Hindustan.