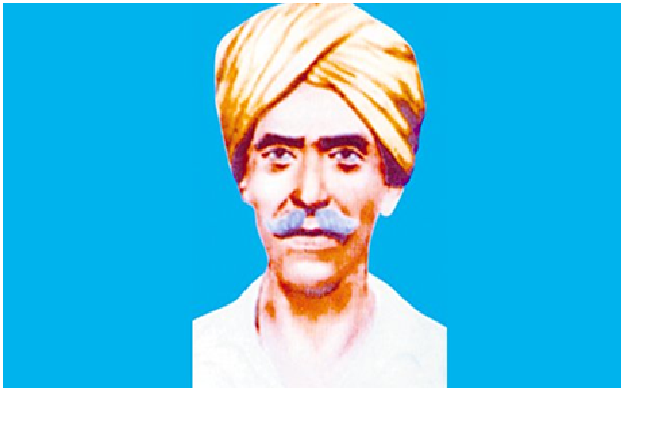 Like Alluri Sitaramaraju who led a tribal rebellion in north Andhra and sent shivers down the spine of the British govt, the great tribal hero Komuram Bheem has fought for jal (water), jungle (forests) and zameen (lands) rights for his people. He fought valiantly against the dastardly Hyderabad nizam’s army and made the supreme sacrifice of his life in Babejhari hills on Aswayuja pournami in the year 1940.

This Gond hero was born in a remote village sunkepally, in the dense forest and hilly region of Asifabad district on 22ndOct 1901. The heroic tribe is as simple, guileless and clear as the forest streams, and have the valor not only to kill wild animals when necessary, but also to give up their lives for the dignity of their people and for upholding dharma. The nizam’s army swooped in and raided the forests as forest officials and middlemen and subjected the Gond people to unspeakable atrocities, the tribals were cruelly exploited. Komuram Bheem’s father, Komaram Chinnu was killed by the nizam army as he resisted their brutality. At a young age of 15, he lost his mother too and started tilling the land for livelihood. During those times, pattedars used to issue land papers to the tillers. When a pattedar Siddique saw that two young brothers were tilling land, he had conspired to confiscate not only their produce, but also their land. It was the habit of pattedars to confiscate the lands of poor tribals, and unable to fight the army, the tribals would give up their traditional rights over their own lands. Siddique underestimated the young lion; as soon as he threatened the Bheem brothers, Komuram Bheem axed siddique to death then and there.

The nizam’s rogue army was running amok ransacking forests and seizing lands of the poor tribals for ages, for the first time they were shocked to realize just what would happen if the tribals fought back. A contingent of Nizam’s army was sent to Sunkepally to arrest Komaram Bheem, sensing the raid, Bheem escaped to Chanda (today’s Chandrapur) and from there on to Pune.     Pune in 1935 was the center of tremendous activity in the great struggle for India’s freedom. Just like birds of same feathers flock together, Komuram Bheem got connected to the freedom fighters there and learnt to read and write. With their help, he went to Assam and got trained in the use of arms and ammunition. He learnt about the great hero Lachit Barpukhan who fought and won against the moghul army. He took inspiration from the great tales of courage of Lachit Barpukhan and Alluri Sitharamaraju.

He gave the slogan that jal (water), jungle (forests) and zameen (lands) are the natural assets of the sons of the soil, and started non-cooperation by refusing to pay taxes to the nizam. The nizam sent army and police to suppress the tribal revolt. The guerilla military-trained gond youth started killing the army as soon as  soldiers approached their villages. Realizing that he cannot win over the tribal revolt, Nizam sent Asifabad collector to Komaram Bheem in the pretext of working out a truce.

The collector then promised that he would distribute land pattas to tribals in and around babejhari. The courageous lion Komaram Bheem didn’t fall for these obvious ploys. He announced that, `not just in jodeghat, the jal(water), jungle(forests) and zameen(lands) of all the 12 tribal villages are the customary and natural rights of his people, and hence nobody needs to give them land pattas’. He declared that `nizam had no right on the tribal lands’. He also warned the collector that `all his followers must be released from jail unconditionally, or else the battle will intensify’. The collector returned unsuccessfully. Immediately Komaram Bheem traveled to Hyderabad and stepped into nizam’s court. During those days, people were frightened of nizam’s army and his cruel militia, the razakars. But the fearless lion Komaram Bheem stood in the nizam’s court and declared that all rights in the 12 villages belong to the tribals only. The nizam was too stunned to react at this open act of defiance and revolt. But as soon as Bheem left, the nizam let loose his rogue army of razakars on the tribal hamlets.

The nizam army and the razakars unleashed their atrocities on the hapless gond tribals, molested countless women, targeted modern weapons and guns at the people. With the inspiration and training given by Bheem, the tribals started guerilla warfare even though they had no modern weaponry. Unable to face the ferocious battle headlong, the nizam’s army was looking for a clandestine opportunity to kill Bheem. In the year 1940, in the month of October Aswayuja Pournami, on the full-moon night, Komaram Bheem was asleep in the forests. The nizam’s talukdar (RDO)army surrounded Bheem and started firing in the middle of the night on an unarmed sleeping man. Bheem awoke and started battling with the nizam’s army. Komaram bheem’s army couldn’t withstand nizam army’s modern weapons for long, even though they fought most valiantly and fiercely. Finally the great fighter Komaram Bheem had fallen in the battleground; and every year to this day, people of Jodeghat commemorate his memory in great reverence.

The  only real tribute to this great tribal freedom fighter is to empower the tribals of asifabad, by giving them full rights on their lands, prevent alienation of tribal lands to non-tribals and build roads and infrastructure in jodeghat – asifabad- kerimeri in the still backward region, as well as provide education and health facilities to the people.