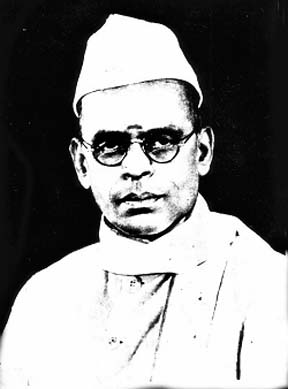 S.SATYAMURTI – A BORN FREEDOM-FIGHTER WITH HIGH LEVEL OF COURAGE AND ARTICLE OF FAITH

It takes uncommon and almost superhuman efforts to stand and oppose what the major portion of the population is following whole heartedly. Satyamurti was a patriot and an Indian politician. It was the high level of courage and an article of faith that S. Satyamurti had in his repertoire that made itself evident when he opposed the Gandhian sensibilities in the 1920s for not participating in the legislature. It was his ability to not withdraw from the situation at hand but to face it with a hearty dedication that escorted him to the safe shores; early, when his father died and the responsibility of taking care of the family was on him, and on many other other occasions afterwards: for the society and the nation. “He was a born freedom-fighter, a leadmine fighter as the Scots say to whom the fight was the thing.” – The Hindu.

S. Satyamurti was born on 19th August 1887 in Thirumayam, Madras Presidency, British India in an orthodox family. His father, Surendur Sastriar was a scholar and a pleader by profession. Satyamurti was one of the nine children and was the eldest among his brothers. When his father passed away, the responsibility of taking care of his mother and siblings fell on him. He completed his intermediate from Puddukottah Maharaja’s College and then joined Madras Christian College in 1906 for his B.A. in History. Bright and diligent student that he was, he continued in the same college but this time as a tutor. He further pursued his education in law by joining the Madras Law College. Prior to his participation in the national movement, he had the honor of practicing law under Mr. V.V Sreenivasa Iyengar and later with the former President of the Indian National Congress, Shri S. Sreenivasa Iyengar.

Though Satyamurti had plunged into politics early after he had won college elections, officially, his political career started in 1919 when he was made the secretary of the Congress delegation that went to the Joint Parliamentary Committee in UK to protest the Montagu-Chelmsford reforms and the Rowlatt Act. In 1926, he was again sent to UK to present the Indian point of view to the British public. While he was there, he was also the London correspondent of The Hindu newspaper. Just as with many other patriots and freedom fighters, Satyamurti wasn’t left behind from landing behind the bars on several occasions. It was in 1930 that he was arrested for lifting the Indian flag on top of the Parthasarathy Temple in Madras. Along with C.R. Das and Motilal Nehru, he was one of the leading Swarajists who laid the foundation stone for the parliamentary democracy in India. In 1937, it was result of Satyamurti’s persistent efforts that congress romped home in elections to the Madras Legislative Assembly.

In 1939, Satyamurti was appointed as the Mayor of Madras and it was during his tenure that he succeeded in convincing the British government to accept Madras Corporation’s proposal for construction of reservoir in Poondi (50 km west of the city) to increase the water supply position in light of an acute water shortage and World War II. It was the unceasing efforts of Satyamurti and his refined administrative abilities that the proposal was accepted and the foundation stone was laid in a matter of eight months. This Poondi Reservoir Scheme is now called the Satyamurti Sagar. He was also actively involved in the Swadeshi Movement and in 1940 he was arrested and imprisoned again for a period of eight months following his participation in the Individual Satyagraha. Satyamurti participated in protests against the Partition of Bengal, Rowlatt Act and the Jallianwala Bagh massacre and the Simon Commission. Satyamurti was jailed in 1942 for his activities during the Quit India Movement. He was later released.

Satyamurti, during his lifetime, was the mentor of K.Kamaraj, who was the Chief Minister of the state of Tamil Nadu between 1954 and 1963. He found Kamaraj “an efficient, loyal, indefatigable worker and skillful organizer”. The two of them grew fond of each other with each passing day and their bond became stronger and stronger. Also, they complemented each others’ skills. In 1936, when Satyamurti was elected President of the Provincial Congress Committee, he appointed Kamaraj as the General Secretary. Four years later they swapped positions. Such was their passion that the party base was strengthened with their relentless effort. Kamaraj’s devotion towards his mentor was such that when India gained independence, he first went to Satyamurti’s house and hoisted the Indian flag there. On his election as Chief Minister of Tamil Nadu, Kamaraj went to Satyamurti’s house and garlanded his photo and paid his respects to the leader’s widow. Additionally, he got the headquarters of the Tamil Nadu Congress Committee named after Satyamurti as Satyamurti Bhavan in recognition of the tireless work done by the latter for the Tamil Nadu Congress and for India’s independence. Also, Kamaraj got the the Poondi reservoir named after Satyamurti as Satyamurti Sagar.

He was tried and deported to Amravathi Jail in Nagpur and was hurt in the spinal cord during the journey. He succumbed to his injuries at General Hospital, Madras on March 28, 1943: two years before the end of WWII (August 15, 1945) and four years before India’s Independence (August 15, 1947). He was a highly regarded politician of rare abilities, deeply mourned by his colleagues and the people of Madras Presidency, to whom he had dedicated his life, to bring them freedom and justice. Satyamurti died on 28th March 1943, in Madras General Hospital.