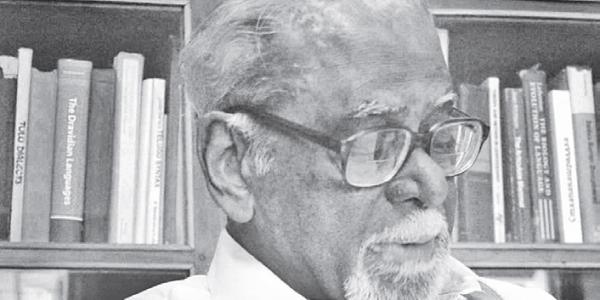 For years we have heard the lament about the declining use of Telugu by Telugus. What do you expect when today’s parents prefer to send their children to English medium schools? Prof Bhadriraju Krishnamurti had a simple solution to the problem: teach professional courses like medicine, engineering and management in Telugu.

This was one of the many suggestions he made in a blueprint submitted to Telugu University to preserve the beauty of Telugu for future generations. He himself had studied in the Telugu medium and had grown to be one of the greatest linguists.

Prof. Krishnamurti was a straightforward man and passionate teacher who never minced his words. He was a relentless scholar, and his advice to peers and pupils alike was never to stop learning. His contribution to Indian linguistics can hardly be missed. He was a great academician but also a visionary administrator. He founded a number of departments of linguistics and mentored a whole generation of linguistic scholars. It was in view of such a stellar contribution that the University of Hyderabad honored him with a degree of honoris causa.

Bhadriraju Krishnamurti was born to Bharatamma and Subrahmanyam in Ongole on June 19, 1928. He exhibited his intellectual prowess early, winning literary and debating prizes at school. He began writing poetry at 13. An anthology, Cinnanaati Padyalu, of his early work was published in 1998 and is a reminder of his breathtaking talent: It included a Quit India-inspired long poem of 300 verses in the graanthic style, entitled Maatru Sandesham. Another poem Saagara Sangiitam is completely lyrical in style and has been considered a profound and innovative work by scholars. The young Krishnamurti also composed an elegy, Pitru Smruti, in memory of his father.

It was his entry into vyaakarana and modern linguistics that made him realize that there was much more pressing work waiting to be done through the scientific exploration of language. But he never lost his poetic touch. He would occasionally compose an off-the-cuff poem purely for the pleasure of it.

Prof Krishnamurti went to Andhra University in 1945 to study Telugu language and literature, specializing in ‘language’ in the second year of his BA (Honours). He topped the university in the final examination in 1948. Thereafter, he worked for a year as a special tutor in Telugu at his alma mater, Hindu College in Guntur, and was later appointed a lecturer in the Department of Telugu at Andhra University.

A decisive shift in his attitude to language at this state transformed him into a linguist. Under the supervision of G J Somayaji, his head of the department, he started working on Telugu verbal roots, analyzing and comparing them with cognates from other Dravidian languages. At this juncture in 1953, he was awarded a Fulbright and Smith-Mundt Fellowship, which enabled him to go to the USA to work for a master’s degree in linguistics at the University of Pennsylvania. Later, under a Fellowship from the Rockefeller Foundation, he went to the University of California, Berkeley, where he worked, under the guidance of Prof. M B Emeneau, on his seminal work on ‘Telugu Verbal Bases’. He submitted his thesis at the University of Pennsylvania, and received his Ph.D. in absentia in 1957. Krishnamurti then returned to India in 1956 after meeting a number of European linguists at various centres of linguistics with a generous grant from the Rockefeller Foundation. In 1958, he published one of his most influential papers in Comparative Dravidian ‘i/e and u/o alternation in South Dravidian’ in Language, the journal of the Linguistic Society of America. After brief service at Andhra University he went to the University of California at Berkeley as an assistant professor (1960-61). During this period his Ph.D. dissertation (revised and expanded) was published in 1961 by the University of California as No. 24 in the Series of University of California Publications in Linguistics (UCPL). He returned to India to join as a reader in Sri Venkateshwara University, Tirupati, in 1961. The next year, 1962, he was appointed to the Tagore Chair of Linguistics at Osmania University and started the Department of Linguistics, which later became a Centre of Advanced Study in Linguistics in India in 1984. He was instrumental in conceptualizing, designing and implementing the compilation of A Telugu Dialect Dictionary of Occupational Vocabularies, as a member of the executive committee of the newly formed Andhra Pradesh Sahitya Akademi, Hyderabad. The first volume in this series was published in 1962. Such extensive dialect study was the first of its kind in South Asia and so far nine volumes covering different occupations have been published.

Three names from this golden era, which have become household names in Dravidian Linguistics, whose contribution account for almost three-fourths of the publications that have appeared during this period are professors Thomas Burrow, M B Emeneau and Bh Krishnamurti. Among these, Krishnamurti’s works stand out as truly exceptional. He has remained the most productive scholar among the Dravidianists of this part of the century. Krishnamurti has over 100 papers and over two dozen books to his credit. Krishnamurti started his academic career with his magnum opus, Telugu Verbal Bases, wider in scope than the title promised, containing all the five features usually associated with his area of specialization – Descriptive, Historical and Comparative, with focus on etymologies, and Sub-grouping, backed by advanced theoretical foundations. Most Dravidianists have worked on either one or more of these areas but not on all of them. Krishnamurti is one of the few scholars to have continuously worked in all these areas. The TVB has remained a model textbook in Comparative Dravidian classrooms. The Dravidian Etymological Dictionary that appeared later had not only drawn generously on the TVB for its etymological resources but was also influenced by it as a model.

He has been a widely quoted scholar in Comparative Dravidian. His papers have provided neat solutions to many a recalcitrant problem. Although Krishnamurti’s main contribution is in the area of Dravidian linguistics, his work on the Telugu language has been phenomenal and has had an everlasting influence.

Many of his observations dealing with the Telugu parts of speech categories, and complex verb predicates have been found to be aptly suitable as a computational model for Indian Languages. Bh. Krishnamurti’s views on Comparative Dravidian have become the conventional wisdom now.