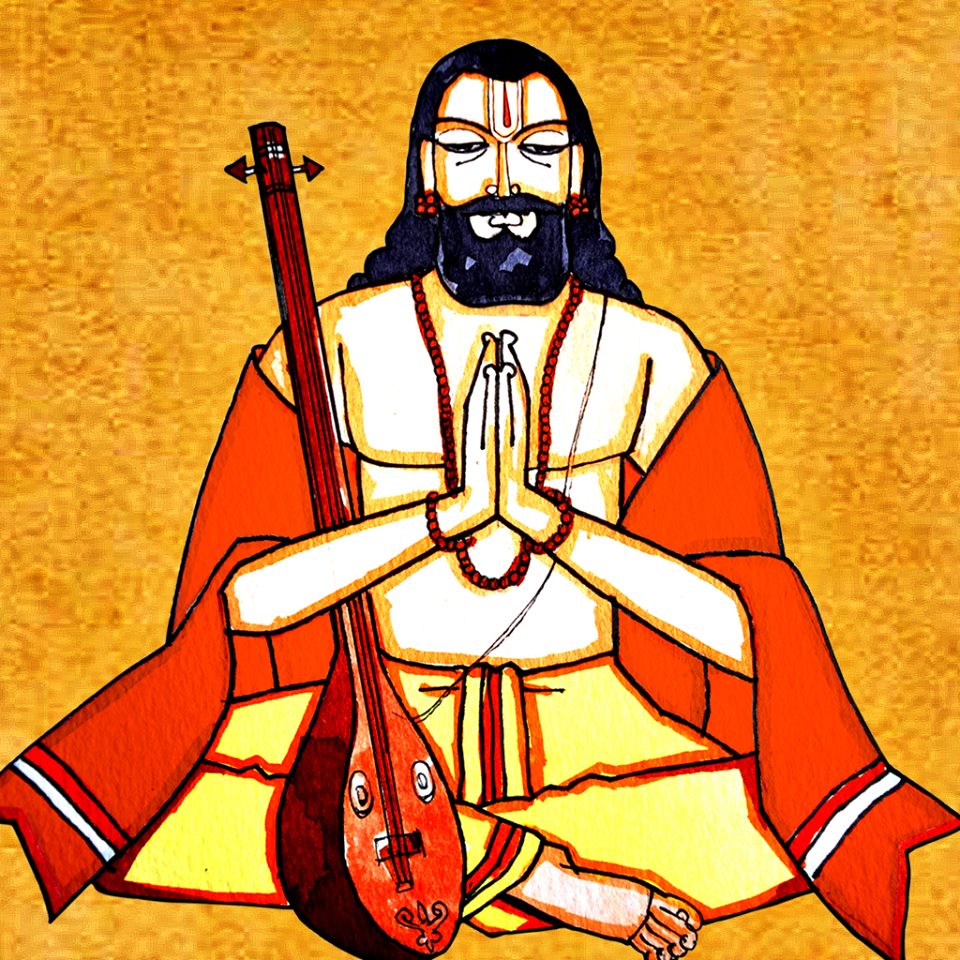 Kancherla Gopanna, popularly known as Bhadradri Ramadasu or Bhadrachala Ramadasu, was a 17th century devotee of Rama and a composer of Carnatic music. He is one among the famous vaggeyakaras (same person being the writer and composer of a song) in the Telugu language, the others being Tyagaraja, Annamayya, Kshetryya. He lived in the village of Nelakondapalli near Khammam, Telangana during the 17th century and is renowned for constructing a famous temple for Rama at Bhadrachalam. His devotional lyrics on Lord Rama are famous in South Indian classical music as Ramadaasu Keertanalu. Even the doyen of South Indian classical music Saint Thyagaraja learned and later improved the style now considered standard krithi form of music composition. He also wrote Dasarathi Shatakamu with a ‘makuTamu’ ‘dASaradhee karuNA payOnidhI’, a collection of nearly 108 poems dedicated to the son of Dasaratha (Lord Rama).

Ramadasu was born as Kancherla Goparaju in an affluent family to Linganna Murthy and Kamamba in Nelakondapalli village of Khammamett Taluk (Warangal Division of erstwhile Hyderabad State / Golkonda Sultanate) of Telangana in the year 1620. Since childhood, he imbibed his family’s interest in spirituality and composed several keertanas on Rama. Ramadasu was appointed as the Tahsildar (revenue collector) of ‘Palvoncha Paragana’, which included Bhadrachalam, a pretty and picturesquely situated temple town on the Godavari river, by Akkanna, his uncle and the administrative head in the court of Qutub Shahi Sultan Abul Hassan Tana Shah. He discharged his official duties earnestly and collected revenues due to the Sultan – while continuing his unswerving service to Lord Rama by chanting his name and feeding the poor.

One day, he visited Bhadrachalam for a Jatara (fair) and was disturbed by the dilapidated state of the temple there. Bhadrachalam was significant to devotees of Rama for many reasons. Lord Rama is said to have stayed near the Parnasala there with Sita and Lakshmana during his exile and also to have visited Sabari near Badrachalam. Pothana, the renowned Telugu poet is believed to have been given direction by Rama to translate the Bhagavata Purana into Telugu here. In spite of its significance, the temple was utterly neglected. So, Ramadasu started to raise funds for the renovation and reconstruction of the temple. After he emptied his coffers and could raise no more money, the villagers appealed him to spend his revenue collections for the reconstruction and promised to repay the amount after harvesting crops. As such, Ramadas finished the reconstruction of the temple with six hundred thousand rupees collected from land revenues – without the permission of the Abul Hasan Qutb Shah.

As the temple was nearing completion, he was perplexed one night about fixing the Sudarshana Chakra at the crest of the main temple. On the same night, it is believed that he saw Rama in his dream and asked him to have a holy dip in the Godavari River. When Gopanna did so the next day, he found the holy Sudarshana Chakra in the river very easily. Soon after the reconstruction work, his miseries started. He was dismissed from his job for misusing the Sultan Abul Hasan Qutb Shah’s revenues and was imprisoned in the Golconda Fort (near Hyderabad) with orders that he be released only after the exchequer received all the taxes in full. Raamadaasu thus earned the name Bandikhana Raamadaasu(meaning imprisoned Ramadasu). Frustrated at god’s indifference to his pleadings, Ramadas composed some of the finest keertanas in his prison cell (reminding Rama of his services in Ikshvaku Kula Tilaka). Ramadasu implores Rama through many emotional songs that were popularized from the stanzas of ‘Dasaradhi Sathakam ‘ and ‘Keertanas’ of Bhakta Ramadasu. They praise the Lord for all his mysterious ways in popularizing his devotees and Ramadasu regularly sings the Lord. The songs ended in a state of total and unconditional surrender to the will of the Almighty.

After 11–12 years of imprisonment, it is said that Lord Rama decided that his devotee’s suffering had reached its pre-ordained ending (because of a certain transgression his soul had committed in a previous birth). Lord Rama and Lakshmana, disguised as two young warriors, entered the bed-chambers of the Sultan Tana Shah in the middle of the night. They presented themselves as Ramoji and Lakshmoji and gave the king six lakh gold coins imprinted with Rama’s own seal in return for the spent six lakh silver coins. The golden coins paid by Rama are known as Ram Tanka coins .They can be seen even today. These coins have the Pattabhishekam scene on one side and the picture of another Rama Bhaktha, Hanuman, on the other side. The Sultan was bewildered at the presence of these charming but strange youngsters in his inner quarters at late night irrespective of tight security. They demanded and obtained on the spot, a written receipt for the money. The receipt was shown to the jailer who released Gopanna the same night.

The next day, both Gopanna and the Sultan realized what had happened. Gopanna did not care much for his release but was inconsolable at his not having seen his Lord even with all his devotion while the Sultan was visited by the Lord. The Lord then appeared to Gopanna in a dream and explained him the real reasons for his actions and promised him salvation at the end of his natural life. The king was convinced that what had happened was a miracle of Lord Sri Rama. He returned the entire money to the Bhadracalam temple. Since then, it has been the royal custom of the Hyderabad State to send gifts to the temple on the occasion of Sree Rama Navami celebrations every year. The King also gave him land around Bhadraachalam to continue his dedicated service to Bhadraachala Rama.

Other compositions are positive invocations, favored by traveling minstrels, including the Tondaiman rulers of PudukoTTai in Tamil Nadu, who popularized his songs. Among his other accomplishments is the creation of the whole Ramayana story in the form of a prose-poem, a Choornika. Bhadraachala Raamadaas lived for 68 years.