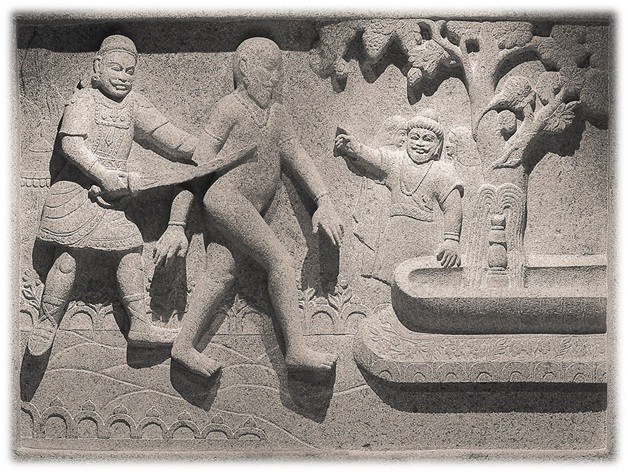 Though the annual aradhana (memorial day) of Sri Sadasiva Brahmendra falls on May 22 this year, no one is clear about the exact date of birth of Sadasiva Brahmendra. However, there is a universal consensus that he was a contemporary of two other prominent Hindu saints of the time: Sridhara Venkatesa Ayyaval and Sri Bodhendra Saraswathi, the latter being the 60th Jagadguru of the Kanchi Kamakoti Peetham. This would place him in and around the 18th century. The three were, in fact, Veda pathashala classmates.

Sadasiva was born to the couple Moksha Somasundara Avadhaani and Parvati and was named Sivaramakrishna. At 17 he walked out of his family when the sublime ‘call’ came, very much like Ramana or Buddha. He met Sri Paramasivendra Saraswathi Yati and became his disciple. It was during his time here that he composed three of his great works on Advaita: Bramhasutra Vritti, Yogasuthra Vritti, Siddhantha Kalpavalli.

Sadasiva, the fierce debater, the argumentative young man was instructed by his guru to “coquer his tongue”. That is it. During the 80 plus years that he lived thence Sadasiva did not utter a word. He became a mauna muni.

There are several miracles attributed to Sadasiva Brahmendra. One of them has been immortalised in stone at the Isha Yoga Centre in Coimbatore:

Once Sadasiva walked right through the harem of a Muslim nawab who had pitched his tent on a field. Sadasiva, stark naked, walked in from one end and out through the other. The Brahma-jnani that he was, he walked in a trance, oblivious of the women and their screams of horror on seeing a naked man.

On witnessing this, the nawab, overwhelmed by uncontrollable rage, ran after the naked saint and, with his sword drawn, severed one hand of Sadasiva from behind with one stroke of his sword. The severed hand fell down. But Sadasiva, unaware of the fallen arm, the bloody stump, or the flowing blood, kept walking.

Sadasiva Brahmendra attained jeeva samadhi in Nerur (Karur district of Tamil Nadu). There are reports of people having seen him enter into jeeva samadhi simultaneously at 5 places, symbolising the dissipation of the physical body into the panchabhutas — the other four being Manamadurai, Puri, Kashi and Karachi. Of these, it is only the Nerur Adhishtanam that remains popular.

It is ironical that Sadasiva Brahmendra’s musical compositions (kritis) like Manasa Sancharare, Bruhi Mukundethi, Pibare Rama Rasam, Gayathi Vanamali or Bhajare Gopalam are more famous than the great saint who composed them. Perhaps their popularity is due to the fact that they have been sung by Carnatic greats like MS Subbulakshmi and Balamurali Krishna. Fame could not touch even his name. That was the supreme level of an unattached life.