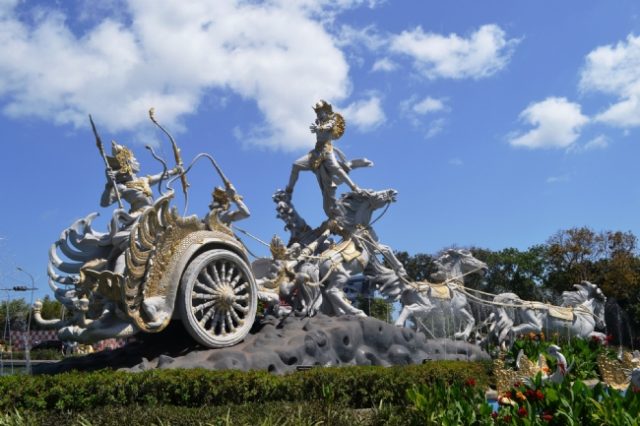 Hindu Dharma has had a profound impact in Southeast Asia’s cultural development and its history. As the Indic scripts were introduced from India, people of Southeast Asia entered the historical period by producing their earliest inscriptions around the 1st to 5th century CE. Hindu civilisation also transformed and shaped the social construct and statehood of Southeast Asian regional polity. Through the formation of Indianized kingdoms, small indigenous polities led by petty chieftain were transformed into major kingdoms and empires led by a maharaja with statecraft concept akin to those in India. The civilisation of India influenced the languages, scripts, written tradition, literature, calendars, beliefs system and artistic aspects of these peoples and nations. Indian influence started around 200 BC until around the 15th century, when local politics absorbed Hindu-Buddhist influence. Kingdoms in the south-east coast of the Indian Subcontinent established trade, cultural and political relations with Southeast Asian kingdoms. Unlike the Hindu kingdoms within the Indian sub-continent, the Pallava kingdom of the southeastern coast of the peninsula did not have culture restrictions on crossing the sea. This led to the Indian influences through the sea routes into Southeast Asia.

Indian scholars wrote about the Dwipantara or Jawa Dwipa Hindu kingdom in Java and Sumatra around 200 BC. “Yawadvipa” is mentioned in India’s earliest epic, the Ramayana. Sugriva, the chief of Rama’s army dispatched his men to Yawadvipa, the island of Java, in search of Sita. It was hence referred to in Indian by the Sanskrit name “yāvaka dvīpa” (dvīpa = island). Southeast Asia was frequented by traders from eastern India, particularly Kalinga, as well as from the kingdoms of South India.

The Indianised Tarumanagara kingdom was established in West Java around 400s, produced among the earliest inscriptions in Indonesian history. There was a marked Buddhist influence starting about 425 in the region. Around the 6th century, Kalingga Indianized kingdom was established in northern coast of Central Java. The kingdom name was derived from Kalingaeast coast of India. These Southeast Asian seafaring peoples engaged in extensive trade with India and China. Which attracted the attention of the Mongols, Chinese and Japanese, as well as Islamic traders, who reached the Aceh area of Sumatra in the 12th century. Examples of the Hindu cultural influence found today throughout Southeast Asia owe much to the legacy of the Chola dynasty. For example, the great temple complex at Prambanan in Indonesia exhibits a number of similarities with the South Indian architecture.

According to the Malay chronicle Sejarah Melayu, the rulers of the Malacca sultanate claimed to be descendants of the kings of the Chola Empire. Chola rule is remembered in Malaysia today as many princes there have names ending with Cholan or Chulan, one such being Raja Chulan, the Raja of Perak. The Chola school of art also spread to Southeast Asia and influenced the architecture and art of Southeast Asia. Some scholars have pointed out that the legends of Ikshvaku and Sumati may have their origin in the Southeast-Asian myth of the birth of humanity from a bitter gourd. The legend of Sumati, the wife of King Sagar, tells that she produced offspring with the aid of a bitter gourd.

Today, vibrant Hindu communities remain in Malaysia, Singapore, Thailand, Medan city of Indonesia and the Philippines mainly due to the presence of Indians, such as Tamil people, who migrated from the Indian subcontinent to Southeast Asia in past centuries. One notably Southeast Asian aspect of Tamil Hinduism is the festival of Thaipusam, while other Hindu religious festivals such as Diwali are also well-observed by Hindus in the region. In Thailand and Cambodia, Thai and Khmer people practised Hindu rituals and traditions along with their Buddhist faith, and Hindu gods such as Brahma are still widely revered.

In Indonesia, it is not only people of Indian descent who practice Hinduism; Hinduism still survives as the major religion in Bali, where native Indonesians, the Balinese people, adheres to Agama Hindu Dharma, a variant of Hinduism derived from ancient Java-Bali Hindu traditions developed in the island for almost two millennia that often incorporates native spiritual elements. In other parts of Indonesia, the term Hindu Dharma is often loosely used as umbrella category to identify native spiritual beliefs and indigenous religions such as Hindu Kaharingan professed by Dayak of Kalimantan. The resurgence of Hinduism in Indonesia is occurring in all parts of the country. In the early 1970s, the Toraja people of Sulawesi were the first to be identified under the umbrella of ‘Hinduism’, followed by the Karo Batak of Sumatra in 1977 and the Ngaju Dayak of Kalimantan in 1980. In an unpublished report in 1999, the National Indonesian Bureau of Statistics admitted that around 100,000 people had officially converted or ‘reconverted’ from Islam to Hinduism over the previous two decades. The Ministry of Religious Affairs, as of 2007 estimates there to be at least 10 million Hindus in Indonesia.

The growth of Hinduism has also been driven by the famous Javanese prophecies of Sabdapalon and Jayabaya. Many recent converts to Hinduism had been members of the families of Sukarno’s PNI, and now support Megawati Sukarnoputri. This return to the ‘religion of Majapahit’ (Hinduism) is a matter of nationalist pride. Next to Indonesian Balinese, today, the Balamon Cham is the only surviving native (non-Indic) Hindus in Southeast Asia. In Vietnam there are roughly 160,000 members of the Cham ethnic minority, a majority of them adheres Hinduism while some are Muslims. After centuries being dominated by Kinh (Vietnamese), today there are some efforts to revive Cham culture.

Cambodia (modern day Kampuchea) was first influenced by Hinduism during the beginning of the Kingdom of Funan. Hinduism was one of the Khmer Empire’s official religions. Cambodia is the home of the holy temple of Angkor Wat, the largest Hindu temple in the world. The main religion adhered in Khmer kingdom was Hinduism, followed by Buddhism in popularity. Initially, the kingdom revered Hinduism as the main state religion. Vishnu and Shiva were the most revered deities, worshipped in Khmer Hindu temples. Temples such as Angkor Wat are actually known as Preah Pisnulok (Vara Vishnuloka in Sanskrit) or the realm of Vishnu, to honour the posthumous King Suryavarman II as Vishnu. Hindu ceremonies and rituals performed by Brahmins (Hindu priests), usually only held among ruling elites of the king’s family, nobles, and the ruling class. The state religion was Hinduism but influenced by the cult of Devaraja, elevating the Khmer kings as possessing the divine quality of living gods on earth, attributed to the incarnation of Vishnu or Shiva. In politics, this status was viewed as the divine justification of a king’s rule. The cult enabled the Khmer kings to embark on massive architectural projects, constructing majestic monuments such as Angkor Wat and Bayon to celebrate the king’s divine rule on earth.

Angkor Wat (Khmer “Capital Temple”) is a temple complex in Cambodia and one of the largest religious monuments in the world, on a site measuring 162.6 hectares (1,626,000 m2; 402 acres). It was originally constructed as a Hindu temple dedicated to the god Vishnu for the Khmer Empire, gradually transforming into a Buddhist temple towards the end of the 12th century. It was built by the King Suryavarman II in the early 12th century in Yaśodharapura (present-day Angkor), the capital of the Khmer Empire, as his state temple and eventual mausoleum. Breaking from the Shaiva tradition of previous kings, Angkor Wat was instead dedicated to Vishnu. As the best-preserved temple at the site, it is the only one to have remained a significant religious centre since its foundation. The temple is at the top of the high classical style of Khmer architecture. It has become a symbol of Cambodia, appearing on its national flag, and it is the country’s prime attraction for visitors. Angkor Wat is designed to represent Mount Meru, home of the devas in Hindu mythology.

The empire’s official religions included Hinduism and Mahayana Buddhism until Theravada Buddhism prevailed, even among the lower classes, after its introduction from Sri Lanka in the 13th century. Since then, Hinduism slowly declined in Cambodia, and finally being replaced by Theravadan Buddhist as the major faith in the kingdom. Despite this, Hindu rituals continue to play an important role in the kingdom. Like in neighbouring Thailand, the ceremony of coronation is conducted mostly by royal Brahmins, during which the sovereign swears in front of the idols of gods Vishnu and Shiva to maintain the ancient national traditions.

(The writer is a veteran of the Regiment of Artillery. An alumnus of OTA and Defence Services Staff College, he is a veteran of Operation Pawan (Sri Lanka) , Punjab and J&K Insurgencies. He was also a Commando Instructor in the Black Cat Commando Training Centre)