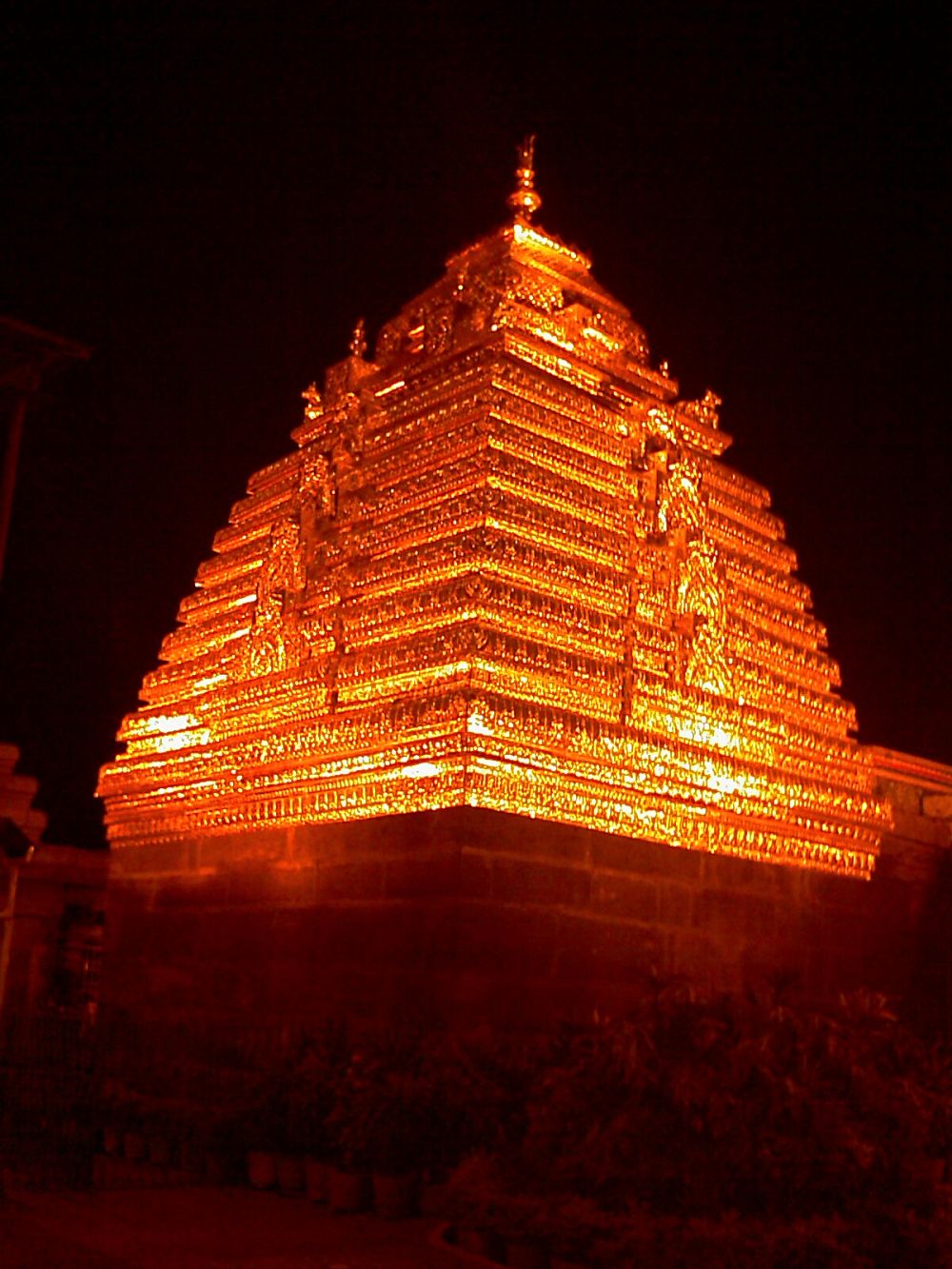 Srisailam is a site of pilgrimage for both Shaiva and Shakta traditions. The town is regarded as both Jyotirlinga Peetha and also a Shakti Peetha. This is the only kshetra of such a kind in India. It is located in the dense forests of the Nallamala range and is a teertha of immense antiquity, definitely ancient even in the days of the Shatavahanas. Srisailam is a town in Kurnool district of Andhra Pradesh and sits atop a mountain next to the Krishna river.

The Srisailam dam, completed in 1980 is a most scenic view from the temple town.

At this place the river Krishna flows through a deep narrow valley, approximately 100 meters wide and nearly at a depth of 1000 feet from the hill top. The river takes a complete horseshoe bend at Pathalaganga vally with in a short distance and marks a large high plateau in this bend. The right part of it we have Srisailam and whereas on the left there is ruined Chandragupta Nagara which is mentioned in the Skandapurana and also some of the celebrated literary works of 12th to 16th centuries.

Srisailam is of foundational importance to the Telugu identity. The three Shaiva kshetras of Kaleswaram, Daksharamam and Srisailam are the source of the name “Trilinga desa” for the Telugu land. Trilinga – Tailinga, Telinga and Telugu are the several modifications of the same word.  Within the Telugu country, the three of these lingas are held to be Jyotirlingas whereas in the rest of India Srisailam alone is regarded as a Jyotirlinga.

While every festival is celebrated with festivity in Srisailam, the most important of all festivals is the Shivaratri festival that falls just before Ugadi.

The region around Srisailam has has signs of human habitation for close to forty thousand years. Stone tools of that period are abundantly found at various places around Srisailam. The earliest epigraphical evidences relate to the Satavahanas who were the first empire builder in Southern India and also the earliest rulers of Andhradesa.

The earliest known historical mention of the Srisailam hill can be traced in Pulumavi’s Nasik inscription of 2nd Century CE. Malla Satakarani, an early member of he Satavahanas appears to be connected to ‘Mallanna’ the deity on this sacred hill. The Ikshavakus (AD 200-300) ruled from their capital Vijayapuri, the site of the current Nagarjunasagar dam, about 50 Km from Srisailam. There is little doubt that they too would have held this kshetram in high regard.

The Vishnukundis (AD 375-612) were the devotees of Sriparvatha Swamy who was indeed Mallikarjuna Swamy, the presiding deity of Srisaila Kshetram. Most of their inscriptions are addressed to the deity. “Bhagavat Sriparvatha Swamy Padanudhyatanam” – in humble service at the feet of Bhagavan Sriparvata Swamy.

The Telagunda inscription of Kadamba Santi Varma proves that the Srisailam region was originally included in the Pallava Kingdom (AD 248-575) and subsequently was included in the first independent principality of Kadambas (AD 340-450).

Stone inscriptions and architectural features attest patronage of Chalukyas (AD 624-848). The Kakatiyas (AD 953-1323) contributed much for the growth of the temple. Several steps in regulating the temple management were taken during their period. Kakatiya Prathaparudra in 1313 AD, made a gift of 70 villages to the temple. Mailamadevi, sister of Ganapathideva is said to have constructed the vimana gopuram of Mallikarjuna Garbhalayam. 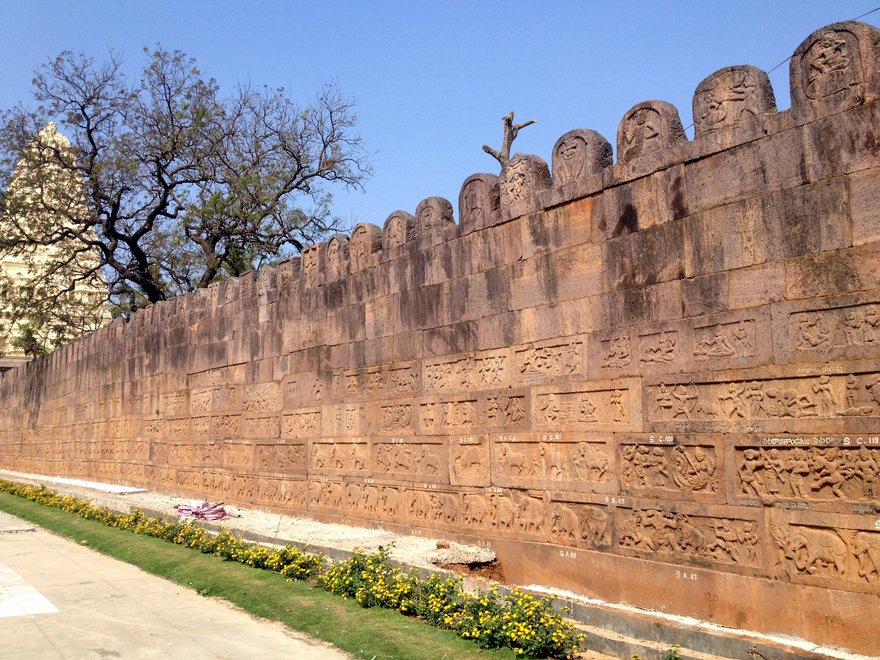 The period of Reddi Kings (AD 1325-1448) was the Golden Age of Srisailam. Almost all rulers of this dynasty served the temple with devotion. Prolaya Vema Reddy, constructed a stepped path way to Srisailam and also to Pathalaganga. Anavemareddi constructed Veerasiro Mandapam in which the Veerasaiva offered the most heroic forms of devotion to Siva in a practice known as Veeracharam.

The Velama Chiefs constructed the flight of steps at Jatararevu, en-route from Umamaheswaram to Srisailam. Major contributions and renovations at Srisailam were taken up by Vijayanagara rulers (AD 1336-1678). Harihararaya II of Vijayanagara empire constructed the Mukhamandapam of Mallikarjuna Temple and also raised a Gopuram on the Southern side of the temple complex. Sri Krishnadevaraya visited the shrine in 1516 AD on his return journey after a war with Gajapathis and constructed Salumandaps on both sides of the car street. It also taken the credit of the construction of Rajagopuram of the temple by him. The catastrophic fall of the Viajyanagara also brought a sudden decline in the attendance and festivities at Srisailam and this kshetram lost its glory.

In the year 1674 AD Chatrapathi Sivaji the great Maratha King visited Srisailam, restored the festivals of the temple under protection of his officers and took up some renovations and constructions. The north gopuram of the temple was constructed under his authority.

The region then passed into the hands of the Mughals who conquered the Golkonda. The region was administered by the Nawabs of Kurnool. After the Mughals, the Nizam of Hyderabad ceded the entire region south of the Krishna to the British.

Srisailam in the puranas

The prominence of this Divya Kshetram is highlighted by the fact that Srisailam is the major reference point for the sankalpam in all rituals for the entire region. According to the Agni Puranam, the rakshasa king Hiranyakasipu worshipped Mallikarjuna Swamy of Sriparvata. This kshetram was his Puja Mandiram and Ahobila Kshetram which is about 220 K.M. from Srisailam was his Sabha Mandapam.

The Skanda Purana proclaims that in the Trethayuga Lord Sri Rama with Seetha devi during their exile in the forest visited this kshetram and consecrated Sahasra Lingas here. The itihasas reveal that in the Dwapara yuga, the Pandavas spent some time at this kshetram. A pond at Srisailam is called as Bheemuni Kolanu. It is also said that Bhagavan Dattatreya did tapasya at this kshetram and a tree ( Sthala Vriksham) in the temple complex is named after him, the Dattatreya Vriksham.

The higest point in the area is the mountain called Shikhareswara. The peak stands at 2830 feet above sea level. It affords a comprehensive view of Srisailam town and temple and also a panaromic view of the entire forest and hill range of the area including the Krishna river and dam.

The peak is home to Shikhareswara Swamy and the Nandi. It is customary to visit this temple and to look at Srisaila Mallikarjuna through the eyes of Nandi before proceeding to the Srisailam temple.

There are many interwoven stories around the sacred hill of SriSailam. A certain number of the more prominent of these are covered here. It is clear that as elsewhere in India, the sthala puranas also of this region illustrate an ancient and unbroken history of a tightly woven mesh of social and spiritual life that include every section of society into an integral whole. Naturally we cannot cover the entire collection of the legends of this ancient temple. Only a small collection is presented.

Parvata, son of Silada Maharshi is said to have performed penance, pleased Siva and obtained the boon that Shiva would permanently reside upon his body. He also prayed Siva that the devatas and the sacred waters of all theerthas permanently remain upon his top. Devotees irrespective of their caste or creed visiting the scared place should be blessed with the Moksha. Siva granted these wishes of Parvatha. Parvatha assumed the shape of a big hill, Srisailam and Siva took permanent residence upon this hill. And he came to be called as Sriparvatha Swamy.

Shakti Peetham and the story Of Arunasura

After the Daksha yajna was destroyed, Siva was forlorn and wandered the earth with the dead body of Sati Devi was placed during Daksha Yagna and hence this place has became as Sakthi Peetam. Sri Maha Vishnu with his power cut up the body of Sati Devi with his arrows, and various parts of her body fell at various parts of India. From Baluchistan to Assam. Where a part of her body fell, there her energy body remained. And such places are Shakti peethas.

In a later age, Adi Shakti acquired the shape of Bhramaram (bee) to kill the rakhasa, Arunasura and then settled at Srisailam as Bhramaramba Devi. This devi is a beloved mother of the Telugu land and is worshipped across the Telugu states.

The Story Of Chandravathi and the Mallika flowers

Chandravathi the daughter of the ruler of Chandragupta Pattana situated near Srisailam on the opposite bank of the river Krishna. Her father was an evil king. So Chandravathi fled the city, crossed the river and went up the hill and settled there with a few of her closest friends and followers.

One day she found that one of her cows standing above a natural rock formation resembling the Sivalinga and shedding its milk over it. The princes in the dream were informed that the piece of the stone was a swayambhu linga of Sriparvatha Swamy and took to worshipping it. In her worship Chandravathi offers garlands of Jasmine (Mallika Pushpam) regularly. One day Siva gave her darsana. Chandravathi prayed that Siva must bear the Jasmine garland (Mallika Pushpamala) upon his head permanently. There after Sriparvatha Swamy came to be known as Mallikarjuna Swamy (Mallika – Architha – Swamy)

The Story Of Vasumathi

According to one story Vasumathi the darughter of a Rishi did tapasya upon this hill to invoke Chaturmukha Brahma. Brahma was pleased and blessed her. Vasumathi asked that she must henceforth be the cause of well being to all existence. And must be known as ‘Sri’, which is also the name of Devi. Her wish was granted and thenceforth the hill came to be called  Srisailam.

The Story Of Vriddha Mallikarjuna

A certain princess desired to marry Siva remained in unyielding devotion to him. One day in a trance she heard Siva instruct her to follow a bumble bee (Bhramara) and to remain where it would settle. The princess woke from her dream, found the bee, and followed it to Srisailam. The bee finally settled on a jasmine shrub and there the princess waited pining away for her beloved Siva. Through many long years the Chenchus, the tribe that inhabit the forest surrounding the temple nourished her with honey, nuts, fruit and a variety of forest produce.

Many years passed as the lady waited for Siva, and finally Siva appeared before her with and old and wrinkled face. I have searched for you for so many years he said, and I have become an old man, he reported. The princess was overjoyed. She cared little for the long life of desolation that she had spent. Nor for the signs of age that Siva showed. Her’s was a devotion that had little to do with the physical. In deep joy the princess married Siva.

On the occasion of marriage the Chenchus invited the couple for dinner and offered them a feast of meat and wine.  The princess having become one with the tribe saw no offence in this most respectful offering by the hosts and pleaded insistently with Siva that he must accept the offering. But Siva would not be persuaded and rose to leave the feast. The princess now commanded her husband that must remain as a stone (Linga). And so Siva became Vriddha Mallikarjuna Swamy. Parvathi was enraged by this affront to her husband and cursed that the princess may become a Bhramaram (bumble bee) for she had followed the bee to this place.

The Story Of Chenchu Mallayya

The lore of Chenchus, remembers Siva as their own. On one occasion Siva came to Srisailam as a hunter, fell on love with a Chenchu girl, married her and settled down on the hill. The Chenchus look upon Mallikarjuna Swamy as their own and call him as Chenchu Mallayya. This story is also depicted on the Prakaram wall of the temple. It is the traditional privilege of the Chenchus to open the temple each season and to close it. The temple stands in their home forest and they are the proprietors of the temple. 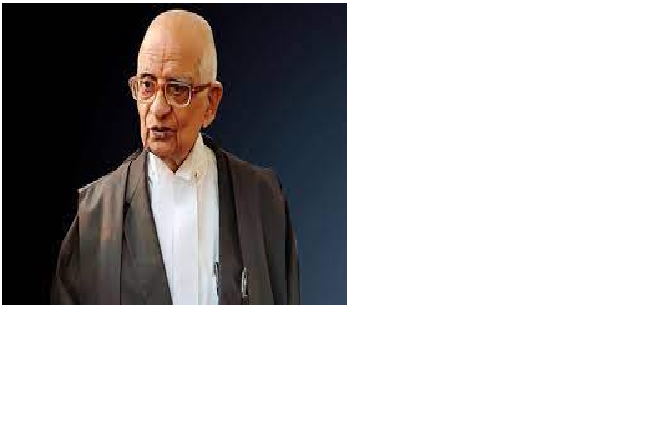