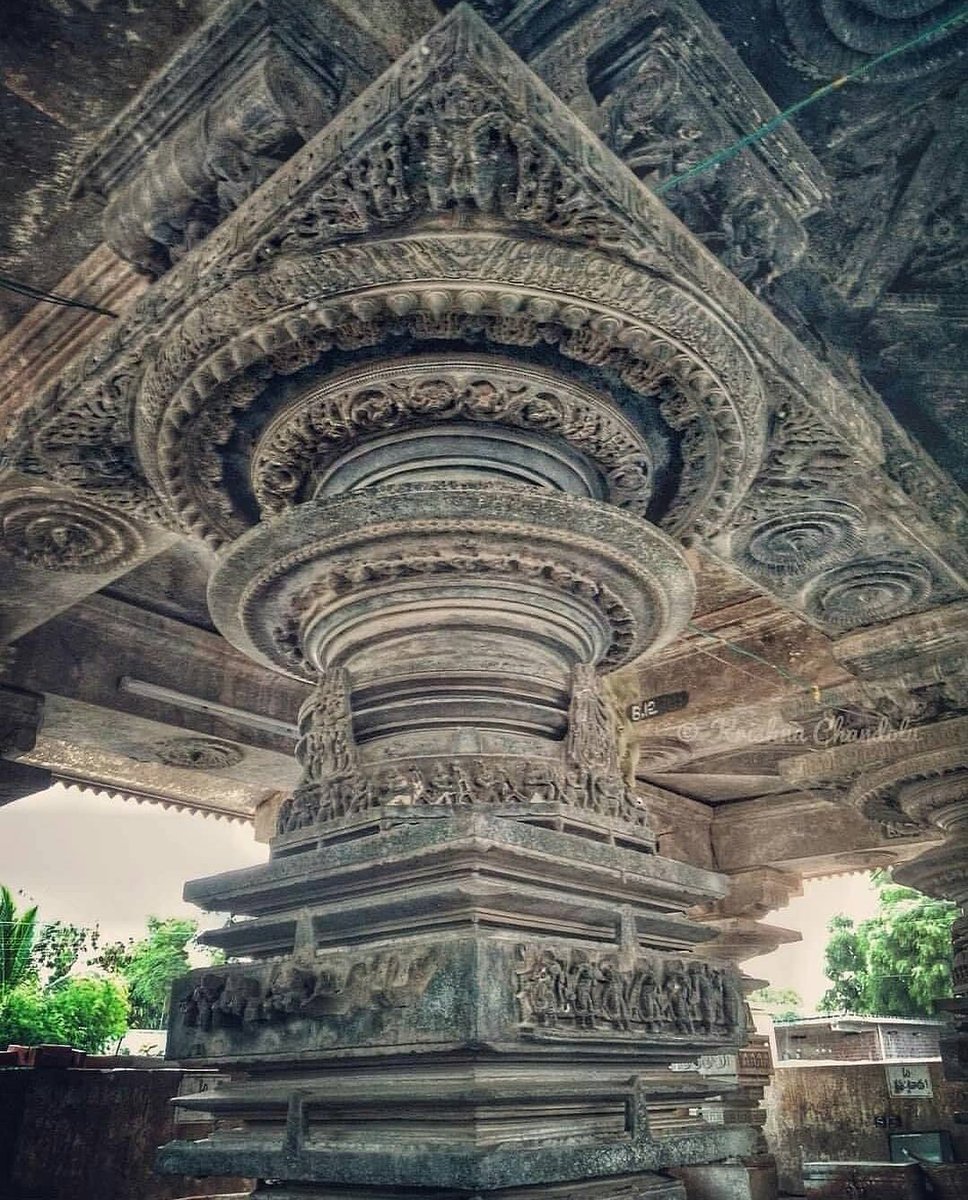 The ancient Lord Shiva temple is located in Pillalamarri village of Suryapet District. This temple is near to Hyderabad-Vijayawada National highway. Pillalamarri is located at a distance of 6km from Suryapet. It among the oldest known temples of erstwhile Nallagonda district (now a separate district).

This village was once the headquarters of the Racherla family, well-known regional feudatories of the Kakatiyas in historic times. The main deity of this temple is Lord Shiva. This is 1000 year old temple built by Kakatiya Kings. This Erakeshwara swamy temple was built on 1208 year by Racharla Bethi Reddy memory of his wife Erasanamma. This temple belonged to the Kakatiya era and is a living example of the architectural greatness of the Kakatiya rulers. It displays magnificently carved pillars and walls where every sculpture is a self-explanatory poem. The walls of the temple are also decorated with stunning paintings. A royal Nandi bull adorns the porch of the temple. A certain style of the craftsmen of the Kakatiya era who have imparted a touch of excellence into the Telangana art and culture is an indication of the meticulous structural design. The main idol Lord Chennakesavaswami is placed in the main sanctum of the temple. The decorations made to the deity during the annual celebrations in the months of February to March are a feast for the eyes. The temple gets filled with huge number of devotees during this time who come from far and wide to offer their prayers and seek the Lord’s blessings.

There are three important temples of architectural and sculptural significance, located in this village. They were constructed during 13th Century AD by Racherla family. Temples such as Nameshwara, Erakeshwara, Trikuteswara, Chennakeshava, Brahma, Saraswathi and Ramalayam were built here.

There is a water well of 800 years old. Beautiful Carvings and Nandi at Pillamarri Temple is the main attraction of the temple. Subbasamudram lake is the near by beautiful place for the visitors. Sri Nameswaralayam is the nearest famous Lord Vishnu temple to visit located in this village.

In addition to the historical and aesthetic value the village imparts, it is also a culturally significant area. This is the birthplace of the famous Telegu poet Pillamarri Pina Virabhadrudu.

History of the temple

At the location where the current temple of Pillala Marri stands, there used to be a huge banyan tree that covered more than seven acres. There was once a massive earthquake at the site that completely uprooted the tree. It so happened, that an Erukula tribesman was listening to a conversation among the birds residing on the tree. They knew that an earthquake was coming and would destroy their home, the pillala marri (the banyan tree with many children). And beneath the tree lay a vast store of wealth.

This tribesman reported this matter to, Bethi reddy, the governor of the area. Shortly the prophecy came true, the earth quake came and felled the mighty tree.

Bethi Reddy had the area explored and uncovered the wealth. He used this wealth to build the temple to Veerabhadra at the spot and many other temples in the village.

Bethi Reddy was the most enterprising of the three.

Kami Reddy’s family belonged to the clan of Recherla Reddis.

Bethi Reddy built this temple in the name of his beloved wife, Erasanamma. It was called Erakeswara Alayam. It was built in  1208. It stand still in full glory. The art of the Kakatiya kingdom shines bright in this temple. The temple stands at the center of the village.

Next to this temple stands Nameswara Alayam, Built in the name of Nami Reddy, Bethi Reddy’s younger brother. This temple holds three lingas in memory of the three figures, the father, the mother and the brother of Bethi reddy. Kacheswara, Kameswara, Nameswara. This temple is therefore was also called the Trikootalayam.

The village has four major temples,

The region was ruled by Kanduru rajas, Deshmukhs, Annasamudrapu rajas, Ummentala Rajas, Gavva rajas, Kancherla (family of Kancherla Gopanna?), Bairi Shetty Rajas, Seti Sindu Rajas and many more. These temples however were plundered while the region was under Deshmukh rajas (). In 1724, there were a class of administrators named the Deshmukhs or Deshpandyas. They used to collect taxes for the king. This was the period when the system of Zamindari and Jagirdari started. Some numbers of ruined men became Pindaris and plundered the people. They also plundered and wrecked many temples in the region.

The pillala marri temple was plundered and wrecked by these desperate bands of plunderers. But Ummettula Varadayya, the headman of the village had the temple restored. A village well that was dug all the way back in the 12th century CE was much revered and still in use at this time. There used to be a stone inscription that recorded the history of the well. But sorrily today neither the well nor the shasanam (stone inscription) stand today.

The well yielded sweet water all year round even in the most complete drought. And next to it stood a temple of Mutyalamma. And so the well was called Mutyalamma Bavi.

The other significant feature of the village is Subbasamudram cheruvu, spread over 540 acres, next to Nameswaralayam. It is fed by the Musi river.  But today the lake has shrunk to less than one third of its original size. The lake covers no more than 150 acres of area.

On the other side of the temple is Nagendruni putta, a black rock upon which is a sculpture of a cobra. The temple was built in 1202. A tunnel from the temple was said to run all the way to the centre of Suryapeta. But this tunnel has completely vanished now.

The temples in this area are all ancient and spectacular. But most of these have fallen into disuse. Even so they reflect the glory of that ancient era.

The many of these Shiva lingas are bent to a side, reflecting the trials of time and tempest upon these temples. They are usually very large in size modelled according to the style of the Shiva at the thousand pillar temple in Warangal. Unlike many other places, even the stern test of time has allowed much of the history of the temple to remain. Many rock inscriptions are found on site that record the history of the temple and the region. The scuplture, the scale and spirit of the place is reminiscent of the glory of the Kakatiyas.

There are other locations in Telangana named Pillala Marri. Always associated with a massive banyan tree. One particular location that is easily accessible from Hyderabad is the Pillala Marri tree on the outskirts of Mahboobnagar city (Palamuru)